How To Write A Press Release That Converts 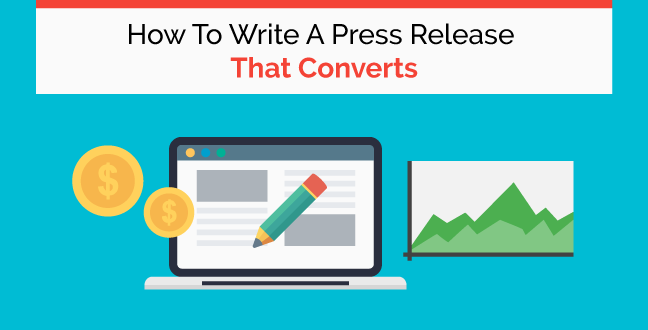 A press release has long been an essential tool in the arsenal of public relations and serves as an announcement to the media. A press release helps you break and shape stories surrounding your business, attracting attention and, in the best cases, changing attention to interest and then to action.

The best press releases can do far more than the dry announcements they have traditionally been used for, instead of helping to define the terms of engagement with the media and the public, providing a framework for the story that ensures others play as active a part in the telling of that story as you do.

This is a big difference that many people miss. When I first started writing press releases, my tactic was to write the news story as I would see it in the newspaper. My logic went: the less work an overworked, underpaid journalist has to do to fill those column inches, the more likely they are to run my story over someone else. This tactic had some success, especially in specialist fields and for local stories, where the institutions aren’t as well supported.

But as time has gone by, I’ve found the practices that work best have more to do with hooks, sore thumbs, and challenges – things that demand some work from both the public and the journalists, but that also promise that work will be worth it in the end.

There’s a multifaceted approach to creating press releases that convert, and those facets include things like empathy, technique and technology. Today we’re going to put the elements of a successful press release under the microscope, so you can improve the way your company is communicating in 2018. This article assumes you’re already competent at writing a good press release. Instead, we’re going to focus on what makes a great one.

What Makes A Great Press Release In 2018 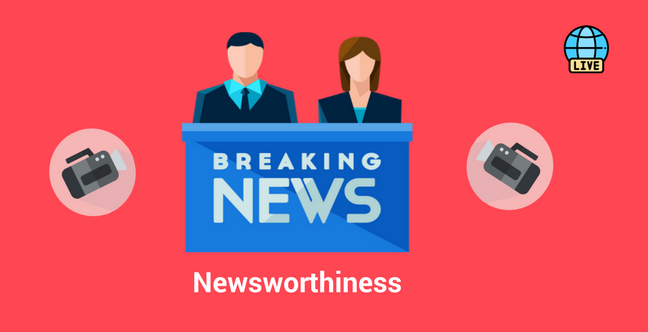 Some things never change, and this one never will. Your press release has to be newsworthy to even bother composing it. So, what does newsworthy really mean?
In essence, it means is it interesting, and worth talking about? To get into further detail, journalists regularly consider the following elements of a story as being newsworthy:

These are just a few examples of what journalists hold to be newsworthy, but there’s more to the requirements for businesses to convert the public and the media into active participants.

What are you launching? What has changed in your company? Those might be the foundations of the story, but they’re not the story. The story is hiding in what it means to people. What does it help people do, what limits does it push back, what challenges does it overcome? When you can answer those questions you understand why it’s relevant.

The more you think like a reporter, the better your press release campaigns will go.

2) Use Multimedia For Audience Engagement 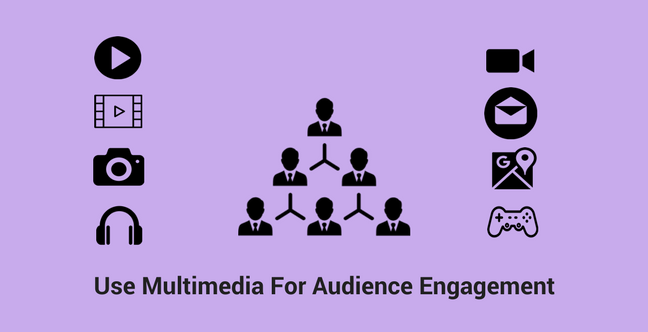 A text-only press release will get nowhere in 2018. We live in an age of multimedia, and people need to see your brand in action, not just read about it. A recent study reported a 970% increase in views for multimedia press releases over traditional PRs – as such, it is one of the biggest drivers of discoverability and virality.

Video and images help you get clicks. An image of your logo is enough to help you increase brand awareness across the touchpoints a PR is distributed through.

Embedding your video directly into the release is becoming more and more popular – Audi recently released a video PR that acts like part documentary, part advertisement, using the Top Gear model of video journalism to control how the vehicle is presented.

Unlike Audi, however, I’d recommend making yours short and shareable. The video should flag up the biggest bullet points of your news, and emphasize the wow factor. Alternatively, you can use an infographic or image to do the same – highlight key points and the punchiest pullquote.

3) Get SEO Benefits From Press Release 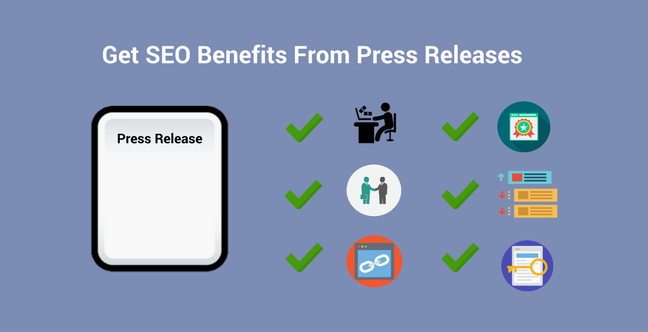 Search Engine Optimization is essential to developing a high level of organic traffic to your website. You want organic traffic because they’re essentially “free” leads. High-quality links from well-established authority websites such as newswire press release can help boost your own perceived authority within your industry. If you are regularly cited by authority figures for your expertise, Google and others will send their searchers to you, confident you have the answers they’re looking for.

Another important thing to remember is to use the proper anchor text. You want to make sure the links back to your site include the keywords your audience will be searching for online. This will create an association between you and the query so your search rankings will get higher as you become more associated with it.

4) Make Full Use of Social Media

If you are writing your press releases properly, there is no reason why they can’t be a useful tool on social media as well as on traditional news release services. Remember, Twitter has been first to every major news event in recent memory, for better and worse. The lead and follow relationship of media and audience is changing, and you’d be foolish not to take advantage of that.

Posting your press release on your social media platforms can expand your reach in expected directions, and create engagement through likes, follows, shares, retweets and so on. With social media and multimedia, you can use your video on YouTube and your images on Pinterest and Instagram to announce your news, with a link to the full PR. On Facebook you can share a key statistic and quote with a link to the full story, while on Twitter you can post the headline with the picture, link and relevant hashtags. A social media press release should use different titles – the atmosphere is far more competitive and less restricted, so you need to be more visceral in grabbing the attention.

What Makes A Terrible Release In 2018 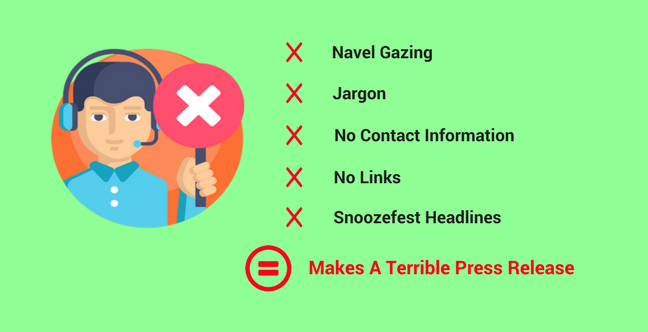 Now we’ve discussed some of the major best practices, let’s look at some of the big don’ts around press release writing in the modern era. You can get everything above right, but if you fall into one of the below traps, your PR will be doomed to fail. I like to think of PR writing a little like tight-rope walking. The best practices will move you forward, but it’s still easy to fall off the side.

Too many press releases get stuck in an internal quagmire, where it’s written almost as a self-congratulatory exercise by the business to project their collective opinion onto the world. Instead, you need to be audience focused. Remember who you are writing for, and write from their perspective. Why does your news matter to them? What new possibilities does it open up? What does it enable you to do on behalf of clients? What can customers experience that is new to them?

Marketing and business language may seem natural to you, but it absolutely doesn’t to consumers. No one wants to see behind that particular veil, and writing your press release in overtly “professional” language, littered with buzzwords, acronyms and talk of market share and quarterlies will guarantee you’ll send any audience to sleep and lose a journalist’s interest because of it.

Tell your story in simple language that people can understand. The power of the message is weakened every time you confuse or obfuscate its meaning. Think about the classic quote – if you can’t explain it to a six-year-old, you probably don’t understand it yourself.

The number of press releases syndicated without proper contact information is baffling. If by any chance you forget this part, you've blown your chance to get your news out there immediately. Journalists need to be able to contact you to ask follow ups and verify details before publishing. Members of the public excited about your announcements can now find no immediate way of acting upon their impulse.

If you don’t include contact information, you are also undermining the legitimacy of your business. Remember, the internet is a dangerous and unregulated wild west with many fraudsters out there – you need to put your name beside what you’re doing.

As above. There is no point creating a good press release if it doesn’t lead to an action from the person reading it. The action should, in all cases, including the clicking of a link. How can they do that if you didn’t include them? Links should be a way for readers to discover more about your business and your latest development, be it a product or service launch or a new hire. Beyond just their SEO function, a PR physically cannot convert without including a means by which to do so.

I can’t underestimate the importance of headlines. A headline is all 80% of readers ever read. It is the gateway to your content and it is the exciting trailer to the movie that is your press release proper. The title should summarize the story, the benefit, the uniqueness and the value of the content within. PR headlines can’t be overtly promotional, but that doesn’t mean they have to be tediously dry, either.

Write A Press Release Like You Did It On Purpose

I really believe the biggest problem with press releases these days is that they’ve become a form of obligation to PRs – a vestigial throwback that is required, not inspired. But the potential of a press release is as potent as ever, and with the integration of multimedia, more varied in approach and impact than ever as well.

It’s time to write good press releases again. Done right, a press release can define the governing perspective of an entire campaign, and shape how the media and the public both understand and respond to it.

So, whatever you were doing before, throw it out and start again with these best practices in mind. Put your messages under a microscope and work hard to craft a press release that is for the reader, not for the business. Pay attention to what you’re doing and saying, and how you’re putting it out into the world. Do that, and you’ll see improvements that can redefine your relationship in writing a good press release.

The 5 Best Backlink Checker Tools For Your Business

The Best Press Release Examples for every occasions

The 5 Best Backlink Checker Tools For Your Business