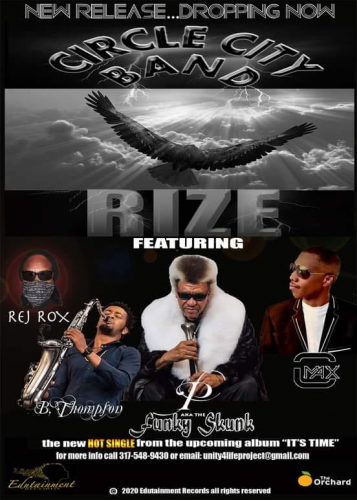 "RIZE" is the HOT single that will be treating music lovers across the globe to an amazing combination of vocal prowess and songwriting mastery.

"RIZE" will be released on all digital distribution platforms on February 20, 2021 in honor of Black History Month as The Circle City Band continues in their pursuit of delivering entertaining yet thought-provoking songs with the group working towards the release of their upcoming album.

The Circle City Band, also known as "CCB", is led and managed by the founder of the brand, producer, singer, songwriter, Paul Thomas
The "LIVE" show features a supreme cast of musicians, vocalists/performers, and in some markets, special, celebrity guest appearances.

Over the years, the band has performed several major concerts, including the Long Beach Funk Festival, co-headlining on the "Starchild" stage with Parliament/Funkadelic's legendary keyboard wizard Bernie Worrell.

The band also headlined the world-famous Whisky A GoGo in Hollywood, CA, Circle City Band has also shared the stage at "sold out" concerts with other great artists such as Bootsy Collins, the Bar Kays, Slave, Lakeside, and a host of others.

In honor of Black Music Month, the Circle City Band is set to release the 2nd album with special guest remixes titled "IT'S TIME," a serious FUNK throwback to the original 80's "BOOGIE FUNK" and Midwest funk era. The songs are anticipated to be the group's BIGGEST collection of hits ever and have already started to receive amazing reviews after pre-promotion on internet radio, YouTube, and social media.

Some of the band's current releases feature LEGENDARY musicians like Felton Pilate of ConFunkShun, Max C of the Gap Band Experience, and Reggie Griffin, Paul “P”, aka the "FUNKY SKUNK." collaborating and mentoring young up-comers like, "REJROX", C Swagger, Bryan Thompson, Allison Victoria, Jusepi Boys, and many others.

The Circle City Band due to COVID-19, will do a virtual concert production to pre-promote starting a tour in the fall of 2021 with appearances at SXSW and a few other festivals as well TBD.