Convert Audio Free has developed software that can convert OGG audio files into any other major format to guarantee compatibility with the wide range of playback devices now available. 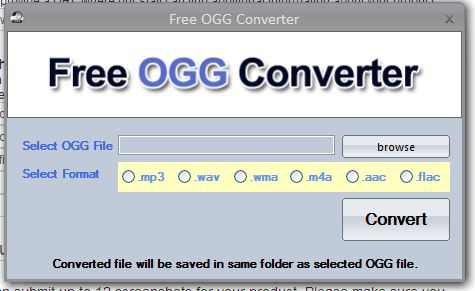 Seattle, WA,, United States of America - - November 27, 2013 /MarketersMedia/ — The OGG codec was once favored by many niche users and even specialist manufactures for creating audio files, but since the industry standards have now been better established it has fallen by the way side. This has created a problem for those who converted their CDs into OGG files in the early noughties, and now cannot use them on modern devices. Convert Audio Free have solved this problem with an OGG Converter that will create copies of these files in all modern playable formats.

The software allows users to create WMA files for windows devices, wave files and FLAC files for higher quality professional uses including DJ’s and Sound Designers, and MP3 and M4A files for playback on portable devices like MP3 players and iPods. It even includes several niche formats.

The software is free to download, install and use an unlimited number of times, and can be used to convert individual files or whole collections. The OGG converter is designed to be lightweight and kind on processor resources so it can run in the background while users get on with other things.

A spokesperson for Convert Audio Free explained “OGG files were popular for a time but their heyday has long since passed- codecs are to modern users as VHS and Betamax or Cassette and 8-Track were to the previous generation. The advantage is that those who have audio stored in now defunct codecs can convert them into usable codecs and recover their music libraries for use with the latest devices. Our OGG Converter does just that, and we are sure it will prove popular with those whose music has been locked away in OGG files for some time.”

About Convert Audio Free:
Convert Audio Free is a premier provider of audio and video conversion software, created and developed by their own software specialists and released free of charge to the world market. After two years developing and releasing a range of successful audio conversion tools the company expanded into video conversion. Their software all complies with the company standards for ease of use that have made them popular with critics and users alike.