Convert Audio Free has made available for free an MP4 to MP3 converter that allows individuals to make audio files out of video files from popular sites like Vimeo. 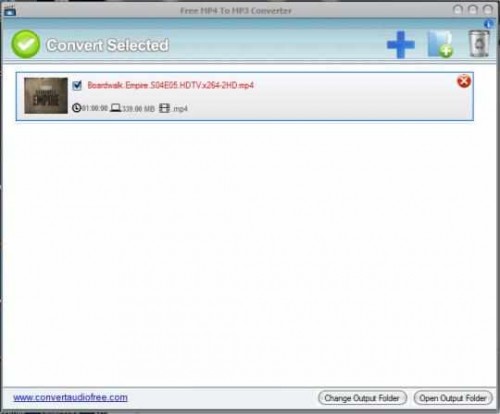 Seattle, WA,, United States of America - - November 27, 2013 /MarketersMedia/ — MP4 is an increasingly popular format for video is the format of choice for downloaded media content when people prefer to save copies of files rather than stream them. However, these video files can only be played back by supported devices and if individuals wish to simply listen to the sound while on the move, they often find themselves unable to do so. Convert Audio Free has created an MP4 to MP3 converter to solve this problem and allow individuals to rip music files from music videos and convert their shows to sound files for easy, convenient playback.

The software is both lightweight and user friendly, with a fast install and running speed while not demanding too much of a computer’s processing resources. It can Convert MP4 to MP3 an unlimited number of times so users can get their favorite track or a whole library of MP4s in MP3 format with just a few clicks.

Able to be downloaded from the Convert Audio Free website in just a few minutes, it promises the best quality sound conversion from video available on the net. What’s more, its high speed and performance values promise fast and effective conversion while running in the background.

A spokesperson for Convert Audio Free explained, “An increasing number of online users now listen to music by using playlists of music videos on websites like Vimeo and YouTube. We created this program in order to convert video into audio so that users could simply listen to tracks on the move, as well as create ‘audio book’ style MP3s of their favorite shows. This works especially well where dialogue is key- classic series like the West Wing can make a great accompaniment on a run or long drive.”

About Convert Audio Free:
Convert Audio Free is the internet’s best provider of audio and video conversion software, specially developed in house and free to use for all. A leading freeware developer, the company has been successfully launching products that make people’s lives easier for over two years. All Convert Audio Free software promises to be easy to use and light on computing resources, and is compatible with all versions of Windows.