Convert Audio Free has developed a WMV to MP4 converter that will allow windows media videos to be duplicated as a more popular MP4 format video, playable on all major modern devices. 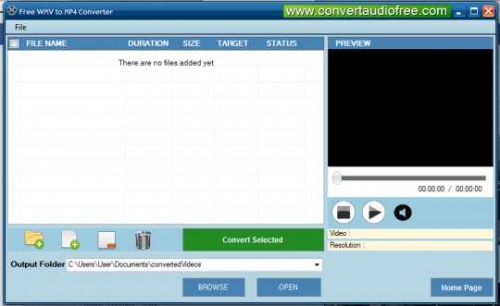 Seattle, WA,, United States of America - - November 27, 2013 /MarketersMedia/ — Windows still hold the majority market share in personal computing, but that lead is slipping year by year. A larger percentage than ever now use Apple devices which come with their own operating system, and more and more people are using Android powered tablets to access the net and do more of their computer’s work. As a result, formats like Windows Media Video no longer excel because they fail to meet the needs of the contemporary consumer. Convert Audio Free has launched a WMV to MP4 converter that will allow users to watch their video files on devices other than their PC.

The software promises to be lightweight in size, making installation quick and easy, and economical in its use of processor resources so individuals can run the tool in the background while continuing to use their computer. It promises to be the easiest and most convenient way to convert WMV to MP4.

Most importantly, the software will be freely available to all and will come with a complimentary unlimited usage license meaning people can convert a single file or a library of hundreds. Simply dragging and dropping or adding the files through a menu, users then only have to hit ‘convert’ and the rest is taken care of.

A spokesperson for Convert Audio Free explained, “WMV is a lightweight and reasonably high quality codec but its use is severely limited as most players not on Windows devices do not support the format. As a result individuals run into issues that aren’t encountered with the MP4 format, which is supported by most all modern playback software on computers, tablets and mobile devices. The solution was obvious, and so we created this converter to allow people to liberate their windows video from its limitations.”

About Convert Audio Free:
Convert Audio Free is the internet’s number one provider of free to use audio and video conversion software. The company have created a full suite of conversion software that allows users to convert audio from and to almost any format, with an expanding range of software available for video formats. Their work can be found on their homepage, on CNET and SoftPedia, and other major freeware distributors.