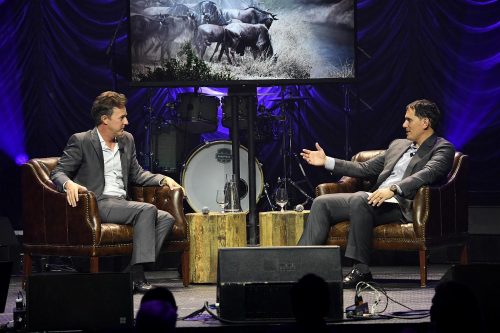 AUSTIN, TX - July 8, 2019 /MarketersMedia/ — UN Goodwill Ambassador for Biodiversity and Hollywood actor Edward Norton joined Global Wildlife Conservation and Austin business and community leaders Thursday, April 11, for GWC’s fifth-annual Wild Night for Wildlife event. About 550 guests attended the private event, which then opened to the public for a concert by Tameca Jones, queen of Austin soul. Each year the event raises significant support for GWC’s mission to conserve the diversity of life on Earth. Thanks to GWC’s incredible supporters, this year’s event brought in a record amount of more than $4 million, with donations still coming in.

“Wild Night for Wildlife is a wonderful celebration not only of Global Wildlife Conservation’s incredible team and partners, but also of all of the heroic individuals and companies that support our important work,” said Brian Sheth, GWC board chair and president and co-founder of Vista Equity Partners, which is Austin based, making Wild Night for Wildlife a hometown event for GWC, Vista and Sheth. “We are grateful to the locally owned businesses and their founders and partners who came together to fight for some of the planet’s most pressing issues. Together we are tapping into Austin’s charitable spirit, which is formidable, to protect the wildlife we share our home with, benefiting all life on Earth.”

In their fireside chat, Sheth and Norton discussed the importance of conservation and saving endangered species to every individual, all communities and the planet. Emmy and Tony award winner Tate Donovan served as the event’s emcee.

Since GWC was incorporated in 2008, the organization has protected more than 350,000 acres of key habitat in the world’s biodiversity hotspots, protected habitat for more than 150 threatened species and for more than 17,000 other species to prevent them from becoming threatened in the future.

Over the past year alone, the organization partnered with the Museo de Historia Natural Alcide d’Orbigny in Bolivia to successfully rediscover the Sehunecas water frog in the wild, including a Juliet for Romeo, no longer the world’s loneliest frog. The campaign has garnered a record amount of global attention (including a mention this month on The Late Show with Stephen Colbert) and has renewed hope that conservationists can save the imperiled species from extinction.

Earlier this year, GWC celebrated the rediscovery in Indonesia of the world’s largest bee, Wallace’s giant bee, one of the Search for Lost Species’ 25 most wanted lost species. With partners, GWC established the first private nature reserve in Haiti. In 2018, GWC captured incredible photos of a Javan rhino, one of the world’s rarest animals, in Ujung Kulon National Park, where GWC is working with partners to conserve the species. Wild Night for Wild Night also honored GWC’s Chief Conservation Officer Russ Mittermeier, who was awarded the Indianapolis Prize, one of the most prestigious awards in conservation, last year.

“We are so honored by the tremendous support from the Austin community and proud to connect the city with such an important mission around the world,” said Wes Sechrest, GWC chief scientist and CEO. “Our Wild Night for Wildlife event gives us a chance to express our thanks, to highlight our conservation wins from Bolivia to Australia to the Bahamas, and to look ahead at all of the ambitious plans to conserve the diversity of life on Earth this year and beyond. We also owe a special note of thanks to the volunteers who help to make this event possible, especially event co-chairs Kelly Green and Julie Jumonville.”