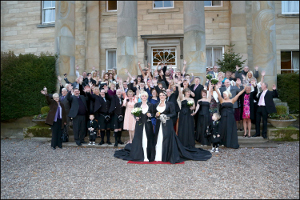 Edinburgh,, United Kingdom - - March 30, 2014 /MarketersMedia/ — Gillian Temple is a professional photographer based in Fife, Scotland. Gillian offers wedding, portrait, pet and child photography services in Fife, Kirkcaldy Fife, East Neuk of Fife, Perth, Kinross, Dundee, Edinburgh, Lothians, Borders and Glasgow. Gillian can be seen in action in the episode of Bainnsean (Scottish Gaelic for weddings), the episode was aired on the Gaelic language television channel, BBC Alba. BBC Alba is aired on digital TV and BBC iPlayer throughout the UK. A clip of the program can be found below.

The episode featured the civil ceremony of two ladies (Laura Nardone and Alicia Paterson) the couple had a civil ceremony at Balbirnie House Hotel, Markinch, Fife. The film crew followed Laura and Alicia on the run up to their wedding watching them make choices and decisions on all the items that they needed for the event (dresses, make-up, photographer, etc.) the Hen nights, the many trials and tribulations leading up to the wedding (Laura works on oil rigs, she was stranded on an oil rig and missed her hen party).

Gillian said she was absolutely thrilled to be asked to appear on the program. Gillian first appears when the film crew and presenter, Joy Dunlop met with the couple in October 2012. Gillian said they met at Balbirnie House Hotel, “we were interviewed, we discussed the wedding photography and wedding albums. The couple then came to my studio in November where they filmed my taking pictures of the couples "Keepsakes" (shoes, rings, invites etc.) and we were again interviewed discussing with Laura and Alicia the updates of the wedding plans.” Laura said the photographing of the keepsakes was a “brilliant idea”.

The wedding took place on the 2nd December 2012, the ceremony was filmed. Some of Gillian's pictures were used to advertise the programme and shown at the end of the episode.

Gillian said she believes in giving a clients a personal bespoke, service for their very special occasions and she aims to deliver a high quality service which includes strong attention to detail but in a relaxed and friendly way. Gillian invites anyone interested in seeing more of her work to look at her portfolio.