With the demand for new party games always being present and rising, War Pong® is answering the call with an innovative evolution of Beer Pong, containing over 25 games, right out of the box. 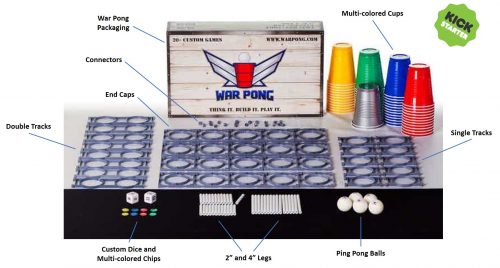 July 28, 2020 — Troy, MI – The creators of War Pong® are pleased to announce the launch of its July 28th Kickstarter campaign which brings the next-generation Beer Pong inspired game to the market.

Beer Pong has been a popular game since the early 70’s, but that doesn’t mean enthusiasts aren’t looking to mix it up or play something fresh. The game developers at War Pong® understand Beer Pong is ready for a dramatic evolution which includes 3-D aspects, custom dice, multi-colored cups, mini-poker chips, and a wide variety of game play. The games vary from fun to strategic with some games being skill-based, while others with a bit of luck. There are games to suit every audience and each game kit delivers countless hours of fun and excitement.

Each War Pong® kit comes with more than 25 different games ready to build and play right out of the box. The platform itself has been designed to let players create their own games - with thousands of possibilities requiring only a player’s imagination to design and build!

War Pong® is currently scheduled to launch, through Kickstarter, on July 28th, 2020 with the mission of bringing the very first run of game kits to market. Supporters who donate early in the campaign will be rewarded with the opportunity to get a War Pong® game kit at a reduced price as part of an “early-bird special,” and will be among the first few to own a debut edition of the multi-player party game.

“War Pong has been developed and designed over the past two years with careful attention paid to game play, which allows players to select from a wide variety of unique and challenging games using the components in each kit,” commented Scott Smith, co-founder of War Pong, LLC. “Some of the games are strategic, some are multi-dimensional, some quick, all are fun, some skill-based and others tournament style. The range of games we developed using our patent-pending track system is truly remarkable,” Smith added.

Greg Lauckner, co-founder of War Pong, LLC said, “War Pong has been a project filled with passion for me. Our friends enjoy getting together for backyard BBQs, parties, tailgates or just having a good time. Watching our friends and family enjoy playing one of our 25 plus games has been an amazing experience. I can’t wait for everyone to enjoy having a great time while playing War Pong for themselves.”

Using feedback from beta testers, War Pong® is expected to quickly become an extremely popular new party game which will appeal to a wide variety of people seeking an outlet for having a great time.

One of the beta testers, David V. from Royal Oak, Michigan, gave it a five-star review. After having the chance to play over a dozen of the games, David stated, “War Pong is a lot of fun! I’m amazed by the variety of games that I have played so far and am very impressed with the product. I have skipped going out to the bar quite a few times because we were having way too much fun playing War Pong."

For more information and the latest news, be sure to visit https://www.warpong.com.

War Pong® was developed by Scott Smith and Greg Lauckner as a revolutionary tabletop game platform drawing its roots from Beer Pong. The company’s goal is to get everyone, who loves having a great time with family and friends, to play War Pong®, and to eventually see War Pong® become the greatest tabletop game ever created.