A new report on land use from the United Nations predicts coming food shortages, as well as higher prices and less nutrition in that food. 4Patriots Survival Food can last up to 25 years. 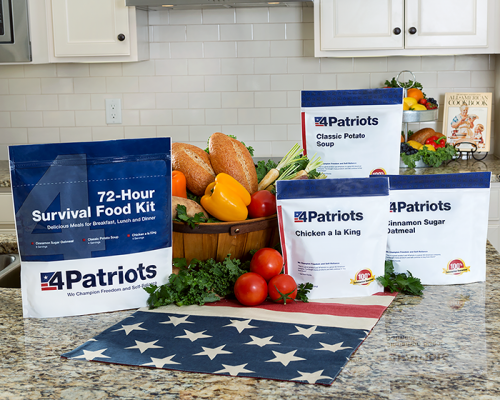 Nashville, TN , United States - August 15, 2019 /MarketersMedia/ — Food will become more expensive, less nutritious and scarcer, according to a new United Nations Intergovernmental Panel on Climate Change report on land use, as reported by CNN and other media outlets.

The report also forecasted that climate change will result in limiting the types of crops farmers can grow. Higher temperatures, more air moisture and additional flooding will hamper the growth of many crops being grown today.

As an example, the report predicted that wheat grown at higher carbon dioxide levels will offer less protein, zinc and iron. A NASA senior research scientist said food systems are already showing some strain, due to the increase in incidence and intensity of heat waves around the world.

In order to gain some “food insurance” now, officials at Nashville, Tenn.-based 4Patriots LLC recommend stocking up on its good-tasting and nutritious Survival Food, which has a shelf life of approximately 25 years for most items.

“Of course, it’s impossible to predict exactly what will happen with food in the future, but this UN report is a sobering look at what could occur,” said Allen Baler, Partner at 4Patriots. “Higher prices, less availability and less nutrition sound like the ‘imperfect storm.’

“The best thing about 4Patriots Survival Food is that it will still be as fresh and tasty in 25 years as it would be if you heated it and ate it today.”

4Patriots Survival Food meals are offered in five different kits – 72-hour, one-week, one-month, three-month and one-year. The meals can be prepared in less than 20 minutes, and they require only boiling water.

The food is contained in easy-to-store Mylar pouches, which keep out air, moisture and light. They are tucked inside tough, stackable totes that are discreet and store anywhere, including the basement, attic, garage, cabin or even an RV.

“Survival food is just one of the products we offer to help people prepare for an uncertain future,” Baler said. “Much more can be found in our latest 4Patriots Catalog.

“In addition to a wide variety of survival food for breakfast, lunch, dinner and dessert, we offer a solar-powered generator, a water purifying pitcher, a power hub for your car battery, a power cell for electronic devices, health-related products, and much more.

“Our customers tell us that the single best thing about preparing for a disaster is that they now have peace of mind. No matter what happens, they’ll be ready.”

4Patriots provides emergency food products that are shelf-stable for 25 years. 4Patriots Survival Food kits are made without any genetically-modified products, preservatives or fillers. The kits are available in 72-hour, one-week, four-week, three-month and one-year supplies.