Boulder’s Story Slam is shrinking the distance between us and streaming true stories about race into living rooms across the country. 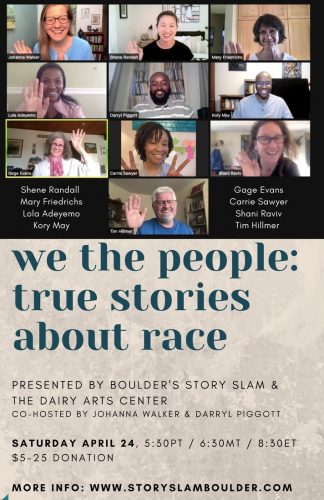 Boulder, United States - April 13, 2021 /MarketersMedia/ — This month's Boulder's Story Slam returns to the virtual stage on April 24 with "We The People: True Stories About Race," an evening of true, personal narrative stories about how race has played a part in the lives of 8 storytellers. Speakers will tell their 7-minute stories from the heart, and from living rooms across the country.

Boulder's Story Slam's regular bi-monthly show works like this: There's a theme for the night, announced in advance of the show. Audience members put their name in a hat and are randomly selected to share a true story based on the evening's theme.

This month, Boulder's Story Slam is doing it differently.

This group of storytellers was selected in advance. They participated in an 8-week workshop in which they dug for and developed personal narrative stories based on the theme of race -- all through the lens of anti-racism work. On April 24, they'll be sharing these stories at an online event open to the public.

"We know the power that stories have to heal, to help us make sense of how we fit into the bigger story of being human, and to learn more about what it's like to be in someone else's shoes," says Boulder's Story Slam founder & co-host Johanna Walker, "which is essential in the work of dismantling racism. In the wake of George Floyd's murder last year, we decided we wanted to use the story slam platform to bring stories of race to the forefront. We're excited to be doing it again with a new cohort."

The workshop was co-led by Johanna Walker, speaking coach, storytelling expert, and host of Boulder's Story Slam, and Darryl Piggott, L.A. based educator. The group is a mixed-race group with people spanning three time zones and five decades -- including tellers in their 30's, 40's, 50's, 60's and 70's.

"Participating in this project gave me the power and confidence of knowing my own story and knowing how to tell it with a lasting impact that can change lives," said Alexis Miles, a member of last year's cohort. "This workshop could truly be a model for many more workshops of its kind. I'm so grateful for the relationships that I built with the other storytellers, and I know that's where the work of fighting racism begins."

Produced by The Dairy Arts Center in Boulder, CO, Walker, and Piggott welcome audiences to join via Zoom and listen to these powerful stories about how race has shaped the storytellers' lives.

"In listening to the stories as they've been developed, I've been moved, inspired, enraged, and broken open. I know the audience will be too. I'm eager for these stories to be offered to a wider audience," co-leader Piggot shared.

BOULDER'S STORY SLAM will take place on Saturday, April 24, via Zoom Webinar in partnership with The Dairy Arts Center in Boulder. "Doors" open at 6:15 pm MDT with an introductory slide show and music. The show starts at 6:30 pm. There is a suggested donation of $5-25. A portion of the proceeds will be donated to The Chinook Fund, funding small, grassroots, primarily BIPOC led organizations.

Tickets are available now at: www.storyslamboulder.com/racestories-tickets