Do you want more traffic and exposure? Get on APNews now
Sign Up Your Account Send Press Release
MarketersMEDIA / Newsroom / Toronto Physiotherapist Conquer The Midnight Sun Run In Iceland 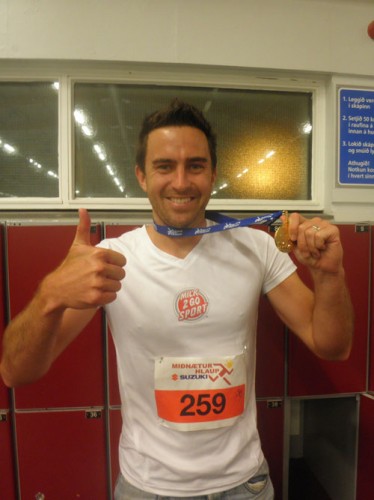 Departing from the downtown Toronto Physiotherapy Clinic where he works at midday, Mark grabbed his backpack and boarded a plane to Iceland.  Then an 8 hour flight and Mark was in the land of the Midnight Sun.

After several days of taking in the sights and becoming acclimatized to the Icelandic conditions, Mark was among the 210 participants at the starting line of the second running of the half-marathon at the 21st celebration of Midnight Sun Run event.

When asked if he was concerned about the unique conditions, Mark replied: “At first I was worried that the cold would affect me but it ended up being just a mild irritant until the race started.”

The race started at 21:20. The course took the runners through a winding valley, past bubbling streams and small waterfalls with picturesque glacier-capped mountains in the background. At one point the runners passed a golf course with foursomes playing through at 10:30 at night.

With a personal best time of 1:27:15, Mark came in 11th overall. The race ended near where it began and all the participants were welcomed into one of the local hot geothermal spas to relax and recuperate after the run.

“It was a truly an amazing experience,” Mark said on his return to Toronto. “Not just being in Iceland but the race itself! I train and stay fit both for my work in physiotherapy and for my love of running and sports. But I can honestly say that I’ve never been as happy running a race as I was during this race.”

Originally from Australia, Mark now calls Toronto home. He and his wife are both avid runners and train regularly together. Mark works as a Physiotherapist at Ace Physio, a downtown Toronto Physiotherapy Clinic.

About Ace Physio
Ace Physio offers personalized one-on-one treatments with their team of; Physiotherapists, Massage Therapists, Chiropractors. and Chiropodists. Visit http://www.acephysio.ca for more information or connect with Mark and the rest of the team at Ace Physio on Google+ or Facebook.