The unique solutions of the BUMO public blockchain network

BUMO is a public open and autonomous blockchain network for ubiquitous value transfer. 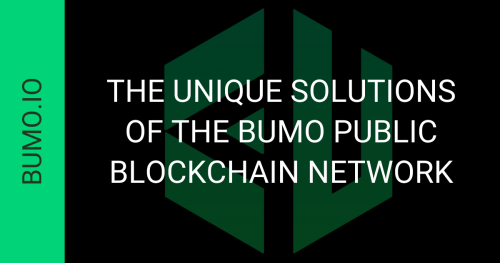 The BUMO Network intends to build a blockchain-based new-generation ubiquitous trust network, so that value may be transferred freely like information.

The BUMO Network aims to build a Blockchain ecosystem that has the features of extensive digital trust, freely transferred assets and public application. This future-oriented network is designed to provide open, efficient and highly extensible fundamental technology support, and is especially targeted at the demands for tokenized assets and circulation of value for the finance, IoT and social network industries.

After being combined with IoT technology, the BUMO Network builds a more extensive “machine” trust through the IoT mechanism. It provides systematic connection between digital assets, smart devices and user data, and benefits people in the areas of tokenization and Blockchain wealth via tokenized transactions and smart contracts.

BUMO is a huge wireless ad hoc network (WANET) which is totally open and autonomous, connecting the physical world and Blockchain seamlessly. All devices may be included in the network as a node. Joint network maintenance, application design and value transfer will be realised, then a massive, ubiquitous network can come into being as well.

The BUMO Network consists of:

Nodes: All smart devices or terminals included in the network are parts of the entire network, which are open and autonomous.

Candidate Node. The first N nodes that satisfy the condition (the size of network and performance requirements). All nodes in the network may apply to be a candidate node.

Validator Node. It is responsible for ledger keeping and resources allocation throughout the network, for which it receives incentives from transaction fees. Only validator nodes which have contributed computing resources would receive GAS incentives in the form of BU.

BCP is a dynamic validator election/lot-drawing algorithm and it is different from traditional Proof of Stake and Byzantine Fault Tolerance. The BCP consensus algorithm is based on the following:

2) All nodes throughout the network can vote in proxy by its stakes on the candidate nodes, and every candidate node will have its total stakes, and the first N candidate nodes having the largest stakes will be elected as the validator node.

3) New blocks will be confirmed by consensus among validator nodes by adopting the asynchronous BFT algorithm. A validator node with higher proportion gets a better opportunity to generate the new block.

5) To avoid Long-Range-Attack, any validator nodes will enter a margin-freezing-stage to prevent the malicious validator nodes from attacking the system deliberately through the redeem script.

BU-Token (BU) is the built-in digital token for encryption of the BUMO Network, which is used to present and measure the digitalized economic activities on the BUMO Network.

To calculate the GAS, the Blockchain resources fee can be charged by two parts. One part charges according to storage and networking which is determined by transaction type and storage size. The other part of the fees will be charged for computing and some of them will be assigned for free based on the BU that one possesses.

The BUMO Network assigns the smart contract execution time according to the quantity of BU, where the user with more BU will have longer execution time.