Do you want more traffic and exposure? Get on APNews now
Sign Up Your Account Send Press Release
MarketersMEDIA / Newsroom / ‘The Truth About Sex’ Tour 2020 Launches in the UK & US

Rob Kowalski Launches 2020 Book Tour in the UK & US for ‘The Truth About Sex’. 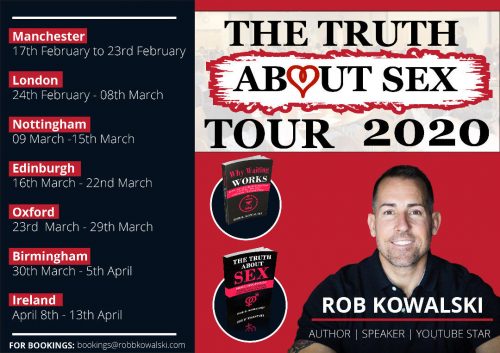 London, United Kingdom - February 12, 2020 — Radical, life-changing encounters are rare, but when they occur, the world is all the better for them. Award-winning author and international speaker, Rob Kowalski, the author of ‘Why Waiting Works’ is on a three-month ‘The Truth About Sex’ tour promoting his book in the UK, USA and also worldwide throughout 2020.

Rob Kowalski’s ‘The Truth About Sex’ Tour 2020 will be held across the UK, USA and worldwide. Bookings and inquiries are welcome.

Rob’s message of delaying sex until marriage as the most sure-fire way to find true love and reach your full potential, along with his practical delivery style has found success with his audience, especially single and unmarried Christians, Muslims, and people of all faith affiliations or lack thereof. Answering their question, “Is abstinence good”, Rob is helping start ‘The Truth about Sex’ study groups across the world, where participants are able to meet over an eight-week period to talk about the ideas in the book. He has recently toured Romania, sharing his ideas for over a month which landed him a book deal with Sophia Publishing House as well.

A self-proclaimed “reformed bad boy’, Rob was living the life of a stripper and nightclub promoter in his hometown of Baltimore, MD. A radical, life-changing encounter with Jesus turned his life around, and he realized that his life of excess was a mess. That mess became his message and he now spends his time sharing the benefits of chastity until marriage, and why it is important to stay celibate to find true love and happiness.

“Sex is a gift from God, and it’s to be enjoyed,” Rob says. “But too many people get things out of order and cause themselves so much pain because they wind up in relationships with the wrong person.” He goes on to say, “marriage is a gift from God given to help save people from the pain they’ll experience after giving themselves to the wrong person.”

Rob’s ideas can be studied in detail in his work, ‘Why Waiting Works’. The book addresses myths and misconceptions around this subject, addressing questions like “Is virginity important”, or the topic of sex before marriage, and offers a common-sense approach to dating and finding true love. The timeless principle of delayed gratification is presented in detail as a way to avoid common pitfalls.

Rob’s areas of expertise include Sex, What The Church & Your Parents Didn’t Tell You, Church Growth/Social Evangelism, and Discovering Your Purpose. He is available to speak at events including churches, colleges, conferences, community centers, bookstores or private gatherings. He is the CEO and Founder of CityFam, a non-profit that advocates for changing lives through the power of community. CityFam has chapters launching in cities across the world.

His video entitled 10 Reasons Not To Have Sex Before Marriage ranks #1 on YouTube for sexual purity: https://www.youtube.com/watch?v=LJh962pYvAU

"It’s amazing how well people are responding to the message! We're creating a movement of people waiting for what they want most, instead of just what they want right now," says Sarah Lee the tour’s manager.

Rob lives in Baltimore, he enjoys spending his time with his family & friends and can often be found relaxing at a game. He encountered Jesus in his twenties and had a massive transformation, from living his life as one of the biggest club promoters in his district. He gave up a life of stripping, casual sex and addictions to follow Christ. He started a non-profit organisation named CityFam to create healthy community and as an antidote to loneliness. As the author of ‘Why Waiting Works’, he then developed The Truth about Sex small group curriculum to help those struggling with waiting and gives practical advice in the areas of sexual addictions and abstinence.

As the founder of Cityfam he successfully started the non-profit organisation CityFam to help support healthy communities and as an antidote to loneliness. Rob is a phenomenal leader & encourages others to keep going in areas of personal challenges. He is the global champion of Why Waiting Works.