The King’s Avatar, a high-profile TV series internationally, has gained a global attention since its release on overseas market platforms. 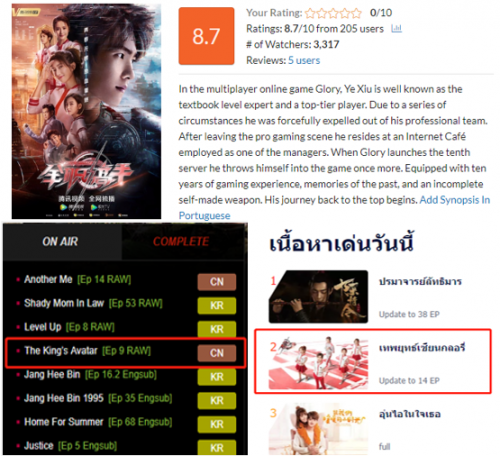 Beijing - August 7, 2019 /MarketersMedia/ — The King’s Avatar is a joint production by Tencent Penguin Pictures and Linmon Pictures. The TV series is produced by Fang Fang and Yang Xiaopei and starring Yang Yang and Jiang Shuying. Since its release on Tencent Video two weeks ago, it has attracted a record number of followers. Airing on Tencent Video, the show exceeded 100 million views within four hours of its release, achieving 1 billion views at the time of writing. The play has won praise from People's Daily, Peking University professor Wang Yichuan, Yangtze River scholar Hu Zhifeng, Life honorary vice-president of Olympic Council of Asia Wei Jizhong, and Famous Cultural Scholar Yu Dan for its spiritual focus and creative value. Many leading figures in China’s esports industry, such as China’s first ‘League of Legends’ world champion Smiling and Champion of the WCG 2005 2006 Warcraft Li Xiaofeng, have recommended the play. On overseas market platforms, such as WeTV (the subbranch of Tencent Video in Thailand, Indonesia and other regions and countries), YouTube, and other platforms, The King’s Avatar has amassed nearly ten million views.

The King’s Avatar has been an instant hit among young audiences due to its fresh storyline centered around esports, as well as the stunning visual effects. No more so than in Asia, where esports has developed rapidly in recent years. Keywords including ‘The King’s Avatar’ and ‘Yang Yang’ became trending topics on Weibo, and the popularity index and new media index of The King’s Avatar ranked No. 1 on numerous third-party data platforms in China. Overseas, with discussion about the drama among the top 3. In addition, various TV and film websites awarded The King’s Avatar high grades: it scored 8.7 at My Drama List, a website focusing on Asian TV and films, and ranked No.4 on Newasiantv’s search list.

The production of The King’s Avatar embraces a number of technological advances, e.g. motion capture, face capture, and their integration with virtual shooting using Unreal engine for real-time preview. The technologies help build up a complete world outlook well larded with virtual and real life stories. Thus the audience are more bathed in this wonderful experience. In the meantime, more eyes have been attracted globally, and more discussion provoked around the “Hollywood level” visual quality and the domestic technologies used to achieve it.

Unlike traditional youth-themed dramas whose plot centers on a love story, The King’s Avatar features esports elements and the esports spirit of “Never Surrender and Give up”, showing the outlook of Chinese youth. “The stronger the youth, the stronger the nation will be.” The King’s Avatar depicts a trendy, modern and energetic Chinese society, transmitting the lives of young Chinese people to audiences abroad.