In recent years, experts have been actively conducted basic research in Rosa roxburghii tratt resources and have made certain progress. 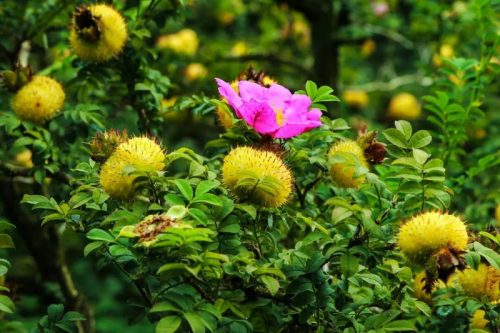 May 21, 2020 /PressReleaseAgency/ — Two or three hundred years ago, the Rosa roxburghii tratt has already drawn the attentions of literary men. The most popular poem about the fruit is “Ode to the Rosa roxburghii tratt”, written by Zhao Yijiong, a number one scholar in Qingyan Town in Guangxu period of the Qing Dynasty. It says: “Growing in the wild the Rosa roxburghii tratt refuses to be potted, and though with bright color its flower won’t go inside vermilion gates. However, with water in dragon well the fruit is made into wine, which is honored to be supplied to the emperor.” Zhao Yijiong was the first national number one scholar from Yunnan and Guizhou provinces who have passed the ancient provincial civil service examination. The poem was written in his childhood, which showed his great talent at an early age.

Rosa roxburghii tratt has had high nutrition and medicine value since ancient times. As it is recorded in A Supplement to the Compendium of Materia Medica and Dictionary of the Chinese Traditional Medicine, Rosa roxburghii tratt’s flowers, fruits, leaves, seeds can be used as medicine as they are beneficial for the stomach, digestion and nourishing functions, and its root bark are effective in curing diarrhea. The Book of Guizhou Province has the detailed description and narration of the plant shape, character, place of origin of it.

During the anti-Japanese war period, Rosa roxburghii tratt has become a natural nutrition pack for soldiers fighting in the war. In 1942, Dr. Luo Dengyi’s team firstly found out its nutrition value and applied it effectively. In order to address the public and soldiers’ problem of lacking nutrition during the war period, professor Luo Dengyi collected all kinds of wild fruits and vegetables in places such as Meitan and Huaxi in Guizhou province, and then analyzed the nutrition components. He aimed to find more wild food resources that can be used to relieve the public’s pain of suffering from starvation and help the people in misery. In his research, he found out that the wild Rosa roxburghii tratt in Guizhou contains rich vitamin C, vitamin P and vitamin K. Among these, vitamin C is as high as 1980-3750mg in per 100g pulp, way higher than in any other fruits and vegetables. And this has caught great attention from the academic circle both at home and abroad.

In recent years, experts have been actively conducted basic research in Rosa roxburghii tratt resources and have made certain progress. Their research mainly covers the following aspects:
First of all, it illustrated the main active substance of Rosa roxburghii tratt.
Secondly, it has the supportive therapeutic efficacy on cancer.
Thirdly, it is beneficial to diabetic patient.
Fourthly, its effect of hangover alleviation and liver protection is obvious.
Fifthly, its effect of improving intestinal function is obvious.

In addition, Rosa roxburghii tratt has certain scientific data support in anti-oxidation, anti-aging, whitening, lipid-lowering and anti-atherosclerosis, and also has good application in the treatment of lead discharging and fluorosis.

In summary, the function of Rosa Roxburghii Tratt can be summarized in four sentences: to prevent and fight cancer and lower hyperpiesia, hyperglycemia and hyperlipemia; to maintain beauty, keep young and relieves constipation; to improve sleep and cure the ulceration; to alleviate the hangover, protect the liver and ward off fatigue.