The Ten Acre brand is ready to take the world by storm, spreading love and happiness. Distribution is planned worldwide; Ten Acre crisps are on the move. 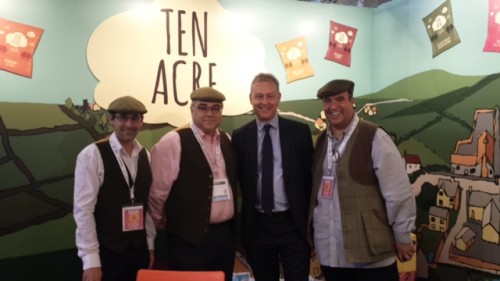 Manchester,, UK - - April 8, 2014 /MarketersMEDIA/ — Ten Acre is the creation of three old friends, Jimmy Attias, Tony Goodman and Ronen Derber. People attending the Barcelona Alimentaria International food show crowded around the Ten Acre booth to sample the delicious blends of flavours bestowed upon these crisps.  Simon Manley, the British Ambassador to Spain was so impressed that he immediately tweeted about them."

Ten Acre crisps are available in a variety of quirky and traditional flavours ranging from Salt and Vinegar to their latest creation,Chicken Soup. "It’s like eating chicken soup without a spoon” proclaims serial entrepreneur Jimmy Attias.  In addition, the marketing team at Ten Acre has come up with one of the most innovative marketing campaigns in history.  Each flavour is named after the book title about fictional characters that exist within an imaginary online location called Ten Acre Village.  Visitors can digitally explore the village and visit places such as the village square and the Ten Acre Village park.  Upon arrival at each destination, visitors are greeted with a story book.  Each story book tells a charming story about many of the characters that live in Ten Acre.  Site visitors are also encouraged to become residents of the village. The Ten Acre crisp story title still lets you know the flavours, such as The Secret Of Mr Salt, When Bombay Got Spicy, The Story Of When The Cheese Met The Onion, How Chicken Soup Saved The Day, When Hickory Got BBQ’d, The Amazing Adventures Of Salt And Vinegar, When The Chilli Got Sweet and The Day Sweet And Sour Became Friends.

The Alimentaria International Food and Drinks Exhibition was attended by over 140,000 visitors from around the world.  Live television and Internet coverage was provided by Informativos Telecinco, a Spanish media provider, El PAIS national newspaper and many others.

The expo had hundreds of exhibitors displaying food products ranging from wine or olive oil to preservative products used in products made from fish.  The show was attended by a worldwide audience including ambassadors and dignitaries from all over. Simon Manley, the British Ambassador to Spain and his entourage travelled from booth to booth but spent 30 minutes tasting crisps and going through the Ten Acre Village exhibit which was so cleverly put together. The Ten Acre Village Exhibit has been going from show to show drawing the audience’s attention.  Their next stop is going to be The World Travel Catering& On Board Services Expo, a 3 day event geared towards the travel industry. Ten Acre crisps are a perfect match for those in the travel and hospitality industry.  Hotels and restaurants are great place to sell and spread the word about these extra delicious crisps.

The company behind the Ten Acre brand is none other than Yumsh Snacks Ltd, the brainchild of three friends Jimmy Attias, Tony Goodman and Ronen Derber. Ten Acre Crisps have sold more than 600,000 bags and were recently featured in the online journal. In addition, Ten Acre crisps are made for everyone. They are gluten free, dairy free, MSG free as well as Kosher and Halal approved.  Ten Acre crisps are even approved by the Vegan and Vegetarian societies.

The Ten Acre brand is ready to take the world by storm, spreading love and happiness. Distribution is planned worldwide; Ten Acre crisps are on the move!