The key selling factor for quantum dot displays are a wide color gamut with minimal re-engineering of LCD panels, thus making it lighter. 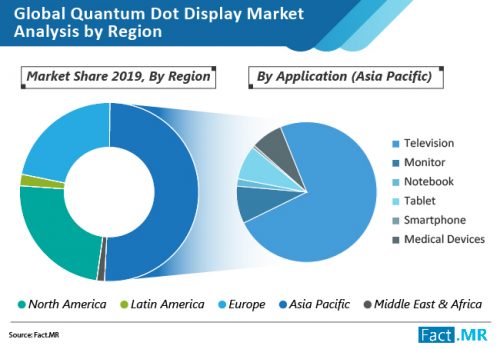 Rockville, United States - January 6, 2020 /MarketersMedia/ — Quantum dots are a type of nanotechnology that are being used in visual display applications as an improvement over a number of LED and LCD alternatives. Quantum dots work by emitting blue light through various sizes of nanocrystals, ranging up to 10 nanometers.

All quantum dots give out different colors on the basis of the size of the nanocrystals. Further, different sizes of suitable quantum dots are integrated to the backlight for the production of green or red light, which narrows the range of the wavelength, which further results in superior renditions of hues and brighter colors.

The global quantum dot displays market is expected to rise at an exponential rate to reach a value of USD 15 billion through the forecast period till the end of 2027. Displays with this technology have already surpassed OLED displays in terms of sales figures, owing to wider range in terms of color, without high costs of structural modifications.

Quantum display devices in the overall global industry for displays has increasingly become a threat to the dominant market of the LCD era. Top competitors in in the quantum dot display industry have been investing in improvements to their offerings, while working to exclude cadmium from their formulations.

A number of regions around the world have set up very strict rules on the use of cadmium in quantum dots, which is expected to restrict the growth of numerous manufacturers and reduce adoption rates as well. The health and environment threats from cadmium have also resulted in the adoption rates going down in addition to bans by government bodies.

With the introduction of cadmium free alternatives however, the quantum dot display technology industry will be able to generate substantial growth in the period of forecast.

The demand for quantum dot displays is set to grow the fastest in the Asia Pacific region, with an exponential CAGR of 32 per cent predicted for the foreseeable future. This substantial growth can be largely attributed to greater demand for energy efficient tech for greater demand in nations such as India and China, which is witnessing a revolution in terms of electronic gadgetry.

The growth in the APAC region can also be attributed to the massive extent of penetration by the internet in recent times and the increased expenditure made by a tech savvy population for not only televisions, but devices such as smartphones as well.

The quantum dot technology is primarily penetrating deeply into the television industry, which is witnessing a substantial rate of growth, even as manufacturers are constantly pushing for the development of novel new components to boost performance and consumer appeal.

The superior color range and rendition features coming from quantum dot technology in television displays is a key reason behind the technological trend in terms of the global television industry, which has become a critical factor for major manufacturers to bolster image quality and aid display.

Fact.MR is a fast-growing market research firm that offers the most comprehensive suite of syndicated and customized market research reports. We believe transformative intelligence can educate and inspire businesses to make smarter decisions. We know the limitations of the one-size-fits-all approach; that’s why we publish multi-industry global, regional, and country-specific research reports.