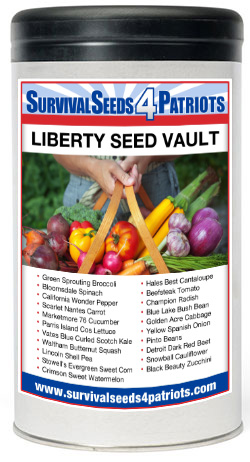 Nashville, Tenn,, United States - - May 19, 2014 /MarketersMedia/ — Some farmers who wish to protect their certified organic seed crops from potential contamination by genetically engineered crops are finding it a big challenge. The problem first surfaced in Oregon in 2012 when a farmer had a difficult time leasing land because it was next to a field leased to Syngenta, which grows crops from GMO seeds.

Oregon organic farmers are now appealing to voters for help. They’ve asked voters in two counties to ban the cultivation of GMOs in order to drive Syngenta out of the area where it grows seed for sugar beets that are resistant to the popular weed killer, Roundup.

GMO crops dominate the production of commodities such as sugar beets, corn and soybeans, and there is growing concern about long-term negative health and environment consequences. There is also an effort in Oregon to ask voters to require GMO food labeling.

SurvivalSeeds4Patriots applauds the efforts of farmers battling to keep their crops pure and reminds individuals that they can acquire their own stockpile of GMO-free vegetable seeds to use for planting, growing, harvesting, replanting and storing for the future. The company recommends that people use only open-pollinated, non-hybrid, non-genetically modified seeds in their gardens.

Providing a path to independence and self-sufficiency, SurvivalSeeds4Patriots offers the Liberty Seed Vault. The air-tight metal storage container includes more than 5,400 heirloom seeds from 21 varieties of vegetables including broccoli, spinach, carrots, squash, corn, tomatoes, onions, beets and zucchini. Each order is accompanied by four guides and a 100 percent money-back guarantee.

After growing and enjoying these nutritious vegetables, gardeners can use the seeds from the harvest for next year’s crops, so they never have to buy seeds again. The company says that this strategy provides additional benefits because it allows people to be less affected by food shortages and increasing food prices.

Unfortunately, not everyone is able to grow a garden. But after storms such as Katrina and Sandy, as well as many other weather events, many people have learned the hard way that having a stockpile of emergency food is a must.

Food4Patriots, the supplier of emergency food suitable for long-term storage, survival and emergency preparedness, launched a product line in July 2013 that includes 72-hour, four-week and three-month emergency food kits. The company has already sold more than 13 million meals to people who want to be ready when the inevitable crisis occurs.

The company’s emergency food kits have shelf lives of up to 25 years. The great tasting and nutritious food in these kits can be prepared in less than 20 minutes and requires nothing more than boiling water. It’s kept in easy-to-store Mylar pouches, which keep out air, moisture and light.