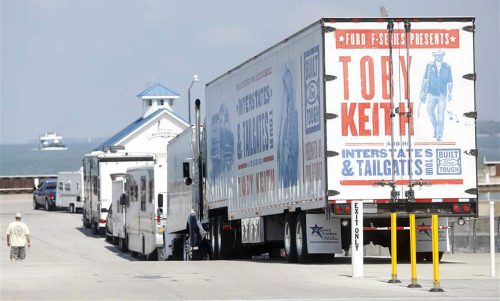 Put-in-Bay Ohio, United States - August 31, 2017 /MarketersMedia/ — PUT-IN-BAY — The small island community of Put-in-Bay is undertaking a massive logistical challenge as its country music festival plays host to superstar Toby Keith. Hosting such a concert on a 2.5 by 5-mile island in the middle of Lake Erie, with only two ferry boats to transport over 12,000 fans, 20 semi-trailer loads of precious stage equipment, 15 food trucks, and scores of law enforcement and support staff, is a logistical feat.

On August 31st, the small island community of Put-in-Bay—located on Ohio’s South Bass Island—will play host to the first ever Bash on the Bay country music festival, headlining Toby Keith as the annual Put-in-Bay Road Races conclude at the island’s airport.

Officials from the Put-in-Bay Airport—whose temporary closure was approved by the Federal Aviation Administration—estimate the road races and concert will generate in excess of $30,000. Such funds are vital for sustaining the small airport—a lifeline for Put-in-Bay, which is accessible only by plane during the winter months.

Featuring five bands, the Put-in-Bay country music festival begins with a performance by Brent Lowry & the Drifters at 3:30 pm, followed by the Cory Farley Band at 4:30 pm, Waterloo Revival at 5:30 pm, and Lococash at 6:30 pm. After a brief intermission, headliner Toby Keith will perform from 8:00 to 10:00 pm—part of Keith’s Interstates and Tailgates Tour, and the only full Ohio concert Keith will play in 2017.

Miller Ferry and Jet Express ferry boats will work in tandem, moving an estimated 2,900 passengers on or off the island every hour. Ferries will run late into the night, transporting concertgoers, vendors, support staff and law enforcement officials. Following the headline act, thousands of concertgoers are expected to inundate Put-in-Bay’s downtown, well known for its vibrant nightlife. Additional law enforcement from the Ottawa County Sheriff's Office will be assisting Put-in-Bay police with crowd management.

“My hotels and rentals were sold out within two days of the festival’s announcement,” said Mark Mathys, owner of Put-in-Bay Resort and other Put-in-Bay hotels and resorts. Mathys estimates bookings for this one-day event will generate over $600,000 in revenue for the small island community, with many attendees staying to enjoy not only the concert but also the classic car races, Labor Day celebrations, and other Put-in-Bay entertainment.