Do you want more traffic and exposure? Get on APNews now
Sign Up Your Account Send Press Release
MarketersMEDIA / Newsroom / Seoul Announces The Plan to Transform into a “Global Open Platform City”

Declared in front of 4,000 people with the slogan, "From Seoul to the World, Making Seoul a Center of Global Start-Up Entrepreneurism". The 1st test bed company to expand overseas and three more companies to enter the Chinese market 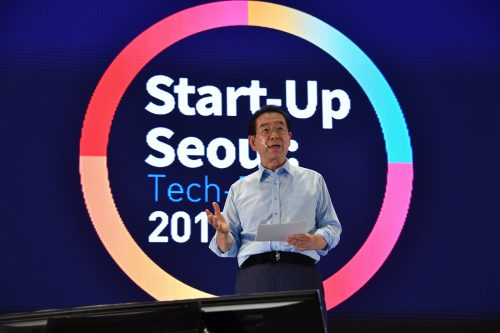 "Start-Up Seoul: Tech-Rise 2019" is the first global start-up event hosted by Seoul Metropolitan City. The three-day event was a big success with about 300 start-up companies and organizations from about 20 countries participating and a total of 4000 visitors.

Toy's Myth builds its subway congestion and environmental analysis system based on IoT sensors and big data. For soft-landing in Thailand, Toy's Myth has signed an MOU with Computer Union and a distribution partner agreement with WinWon. Toy's Myth will be supplying its analysis system to organizations and companies of Thailand through cooperation with consortium among these three companies. "We have performed inspection on Seoul subways, and we are positive that it will be useful in allocation of public transportation and hourly user analysis" said Waring Laoponghan, CEO of WinWon.

Earlier this year, Seoul Metropolitan City declared itself as "Test bed Seoul" in May. Currently, Seoul is opening up its public infrastructure such as subway, road, bridges, municipal hospital and underground shopping center as a "test bed" to test the performance and effectiveness of prototypes and services created with innovative technologies including blockchain, fintech, and AI and verify their business viability. "Thanks to the opening of public infrastructure as a test bed for new technology, which was vital in our success, we were able to investigate our technology by installing IoT sensors in Seoul subway line 5," said Seo, Hyeongjun, CEO of Toy's Myth Co., Ltd.

Seoul is undertaking various activities to make Seoul the city of opportunity for innovative start-up companies under the keynote of "Global Open Platform Startup City". For example, the city hosted a competitive exhibition for start-up companies in manufacturing industry in cooperation with the Chinese hardware accelerator iMakerbase. Three companies, Seojin FNI, Sijung and Replay were selected as the winner of this competition. The three companies will be given the opportunity to secure outlets to sell their products directly in China, as well as to mass produce them in China.

"Start-Up Seoul: Tech-Rise 2019" also featured talks and discourses from authorities on start-ups from Silicon Valley and Singapore. J.F. Gauthier, founder of Startup Genome, a Silicon Valley-based global startup ecosystem research organization and Chris Yeo, head of Grab Ventures, Grab's venture capital, known as Asia's "Uber" attended the event. Also visited the event was the founder and curator of "Museum of Failure", Samuel West, ph. D. A special exhibition was held at Seoul Startup Hub, a start-up incubator under the city of Seoul, showcasing 12 works that collected several global cases that evolved from failure, selected from the "Museum of Failure".

In recent years the foreign start-up investment institutions at Seoul Startup Hub have increased from 2 companies to 12 companies, also increased from 2 countries to 9 countries. The city of Seoul will dramatically improve the startup conditions for foreigners. For example, Seoul will cooperate with the Ministry of Justice in establishing fast-track visas for start-ups as part of the "Global Open Platform Start-up City" plan. Furthermore, Seoul plans to focus on housing support projects by 2022 to ensure that global entrepreneurs don't have difficulties in settling in Korea.

"The city will expand 1,000 spaces for technology start-up companies by 2022 as a platform to cooperate and share startup resources and information," announced Mayor Park, Wonsoon. "to foster core industrial clusters to establish governance to share resources and information." "The city will also focus on building a Seoul start-up platform that connects various public and private infrastructures and services, including start-up programs, investments, and sharing resources." he added. "We will ensure that citizens and global players receive systematically interconnected support".