Sign Up Your Account Send Press Release
MarketersMEDIA / Newsroom / Scientists Develop DMT As A Tool To Communicate With Intelligences Beyond Our Universe.

Scientists Develop DMT As A Tool To Communicate With Intelligences Beyond Our Universe.

Dr. Andrew Gallimore is a neuroscientist currently based in Japan at the Okinawa Institute of Science and Technology. His new book “Alien Information Theory” is released on April 16th, 2019. 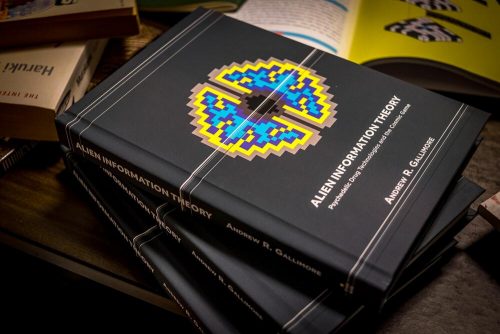 Okinawa, Japan - April 23, 2019 /MarketersMedia/ — Since the earliest days of civilization, humans have gazed into the inky night sky punctured by the blinking lights of numberless alien suns and wondered who might be out there. For several decades now, the California-based SETI institute has directed its radio telescopes into that night sky in the hope that a signal from an extraterrestrial civilization might one day be detected. However, a small number of scientists are now beginning to think that contact with an alien intelligence is more likely to be achieved, not by looking outwards to the worlds beyond our solar system, but inwards, to the worlds inside our heads.

N,N-dimethyltryptamine — more commonly known simply as DMT — is perhaps the most powerful psychedelic drug on the planet, hurling users into a bizarre alternate reality replete with a panoply of intelligent beings eager to import great insights into the nature of reality. These astonishing “reality switching” effects continue to confound scientists, leading some to seriously consider whether the drug’s effects are mere hallucination, or whether this obscure psychedelic might actually gate access to hidden dimensions of reality where alien intelligences reside. Unfortunately, the typical DMT trip is a wild rollercoaster ride lasting only a few minutes, limiting its use as a tool for exploring these remarkable alien realms.

Using techniques adapted from anesthesiology, neuroscientist Dr. Andrew Gallimore recently collaborated with DMT pioneer, psychiatrist Dr. Rick Strassman, to develop a continuous intravenous infusion technology that would extend the DMT journey from a few minutes to a few hours, allowing brave voyagers to establish stable communication with any alien beings they might encounter. This programmed infusion technique is normally used to maintain a stable anesthetic drug concentration in the brain during surgery, but Gallimore demonstrated that the technology could be adapted for exploring the alien worlds visited during a DMT trip.

Gallimore is now working with a small team of scientists and other select individuals to develop and refine the technology using volunteer explorers. Whilst this might sound more like science fiction than science, there can be little doubt that the verified communication with an alien intelligence not only beyond Earth, but beyond the Universe itself, would represent the most important discovery in the history of mankind. And, we would be wise to remember that many of the great discoveries made by our species were once wild sounding ideas sprouting from the depths of someone’s imagination.

In his latest book, “Alien Information Theory — Psychedelic Drug Technologies and the Cosmic Game,” (Strange Worlds Press, April 2019, available now on Amazon), Dr. Gallimore explores how DMT is a technology embedded in our reality that gates access to its normally hidden dimensions, how this technology works in the brain, and what this means for the structure and origin of reality itself.