Santiago Rising - the powerful new documentary from director Nick MacWilliam documents the unstoppable grassroot movement and public protests that burst out of the Chilean streets in late 2019, in response to the economic inequality which engulfed the country. 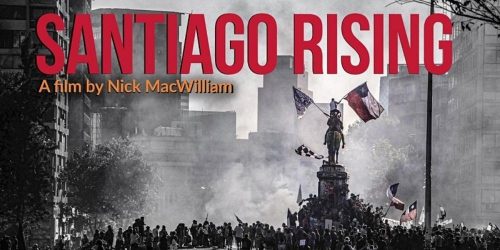 Santiago Rising takes place on the streets of Chile’s capital city in late 2019, as large public protests over economic inequality engulf the country.

The film charts the build-up to the historic vote, in October 2020, that saw Chileans vote for a new people’s constitution to replace the one imposed during the brutal Pinochet dictatorship. It examines how a movement which began as a high school students’ protest over transport fares evolved into one of the most significant events in the country’s history.

Filmed during the weeks after protests began, Santiago Rising meets social movements, protesters and ordinary people in their struggle for equality and human rights.

The film emphasises the creative element of Chilean protest, as music and art play a prominent role in expressing political dissent. We also see the state’s attempts to crush the protest movement through a brutal police crackdown.

Although the odds are stacked against them, Chileans find strength in unity as they aim to overcome Pinochet’s enduring legacy.

'Neoliberalism was born in Chile and it will die in Chile': how Chileans describe the protest movement covered in new documentary Santiago Rising, directed by Nick MacWilliam for Alborada Films.

*25% of ticket proceeds will go to Los Ojos de Chile (The Eyes of Chile), a foundation to support some of the hundreds of victims of eye injuries committed by Chilean police during protests*