Sign Up Your Account Send Press Release
MarketersMEDIA / Newsroom / Safe Earth raised over $100,000 as an Initiative to Save the Planet

Safe Earth raised over $100,000 as an Initiative to Save the Planet

Launched on the 27th of March, Safe Earth is a project aimed towards charity and building a community. 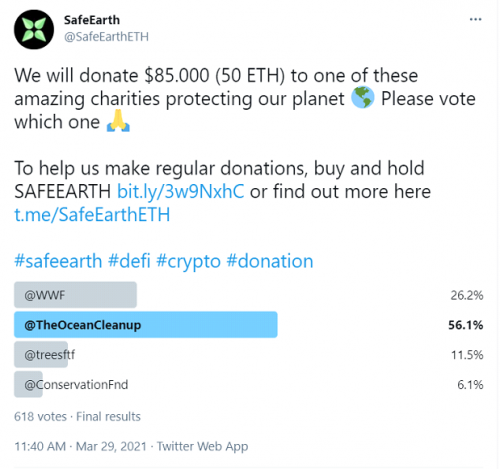 April 4, 2021 /MarketersMedia/ — Launched on the 27th of March, Safe Earth is a project aimed towards charity and building a community. Safe Earth recognizes the damage that has been done to the Earth by deforestation and other planet killers. To counter this, Safe Earth looks forward to collecting capital that will go to Earth Fund – a community fund distributed to Earth Supporting Charities. 1% of each trade is donated to charities that help save the planet with their green initiatives. Within the first few days of the launch, they have managed to collect over $100,000 (50 Ethereum) which will be donated to “The Ocean Cleanup” charity (a charity selected by the SafeEarth community on twitter).

The unique model of the token, helps not only generate capital for charity but also rewards its holders. Another recognizable feature related to Safe Earth is that it has a purely deflationary financial ecosystem. This is made possible by their plans to burn 50% of the tokens after launching. The tokens are sent to a “black hole” address where these cannot be accessed and the scarcity is increased.

As for the investment perspective, the sister tokens of Safe Earth have done exceptionally well in the recent past. SafeMars, skyrocketed in valuation after its release. The investors saw a rise of 900% after the first two days after launch. With the deflationary environment, Safe Earth also seems to be set to show similar high gains in the days to come. The thing to note and beware here is, this token is only available on the Uniswap Exchange until the project announces new listings, and any other variants found on other exchanges for now are fake.