SA Scene has been San Antonio’s premier magazine for 16 years, and has honored lawyer Alexander Begum as one of the best personal injury lawyers in the city. 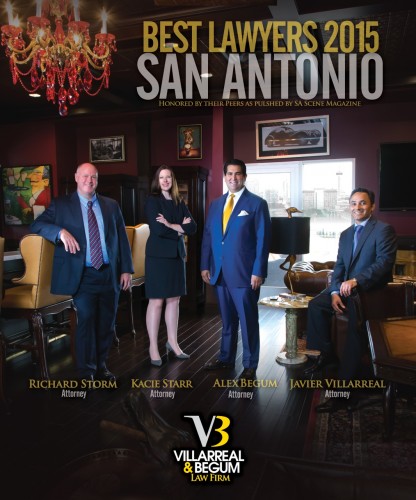 San Antonio, Texas, United States of America - July 3, 2015 /MarketersMedia/ — San Antonio has one of the highest rates of automobile accidents in the United States, and this ensures there is high demand for personal injury lawyers to fight the cases of those who have fallen victim to such accidents. The victims often require a much greater sum for compensation than they first realize, having to pay for long rehabilitation, physiotherapy and other medical expenses, as well as experiencing a shortened career and perhaps even losing a job due to disability. Alexander Begum of VB Law Group is passionate about assisting these people, and has been recognized for his efforts by San Antonio’s own SA Scene.

SA Scene is the longest running local magazine in San Antonio, and every year aims to celebrate pillars of the community in different industries. They have named Alexander Begum to be one of the best personal injury lawyer in San Antonio, as a co-founder and shareholder of VB Law Group in San Antonio, TX.

As well as his tireless work with VB Law Group in San Antonio, Tx, Alexander Begum is also the founder of, and a shareholder in, the Begum Law Group, which offers the same incredible caliber of service to the neighboring region of Brownsville, TX.

A spokesperson for VB Law Group explained, “We were thrilled to see Alexander Begum receive this honor from SA Scene, in recognition of his tireless work for the people of San Antonio and beyond in seeking the compensation victims deserve. SA Scene does tremendous work in celebrating San Antonio and its community, and VB Law Group has always tried to make sure we are an integral part of that community, by providing much more than just legal support. Alex has been influential in many initiatives that reach out to the community, as well as making them aware of potential product recalls and other dangers so they can avoid problems, rather than claim for them after it’s too late.”

About VB Law Group: VB Law Group is a top rated personal injury law firm in San Antonio, TX. The firm helps victims of car accidents, slips and falls, and other personal injury related matters find justice and receive the compensation they deserve for their injuries.