Durable rotomolded products have the ability to withstand some of nature's toughest elements. Learn how these features make them a good candidate to stand up to inclement weather and other harsh environmental conditions. 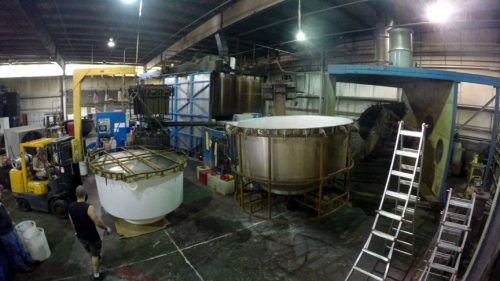 Middletown, United States - November 12, 2019 /MarketersMedia/ — Rotational Molding is a plastics manufacturing process that produces extremely durable polymer based products. Commonly known rotomolded products include playground slides, water tanks, plastic wall barriers, commercial laundry carts and so much more. Because the rotational molding process does not introduce any stress into the molding process, the parts are wildly resilient to impact, abrasion and deterioration. In fact, if the product has been properly cooked out in the molding process, the product will be extremely resilient to impact, making the product nearly indestructible. If the proper certified prime virgin materials are used with correct UV inhibitors, the product will be able to withstand the harmful ultra violet rays from the sun for many years to come before the product begins to deteriorate. Because of the strength, durability and ability to withstand environmental elements, the rotational molding process is a great fit to manufacture many parts with environmental ties.

Freezing temperatures and slick road conditions are common by-products of winter weather throughout parts of the United States. Black ice and slick road conditions are no stranger to drivers who have no choice but to endure winter road conditions for their daily commutes. Over the decades, pick-up truck drivers seem to fight winter weather conditions more so than drivers of traditional vehicles such as cars. Because of the weight distribution of pick-up trucks, drivers have attempted to utilize a number of products to add weight to the back end or the bed of their pick-up trucks. Everything from sandbags, bags of concrete, steel plates, sand-filled PVC tubing with the ends capped off and many other options such as skids of salt have even been used to help add weight to the bed of a pick-up truck. However, all of these methods have their short-falls, as even sandbags get wet and deteriorate as winter rain and snow fall throughout the season. Granger Plastics, an Ohio-based rotational molding company, has made headlines recently, as the winter snow fall sent drivers looking for a better method of adding weight to the bed of their pick-up trucks. The all-weather traction device, called the “Weight-Mate” is a set of 2 durable, rotationally molded tanks that are offered in 6 foot, 6.5 foot and 8 foot bed lengths to fit most makes and models of pick-up trucks. The tanks are placed between the wheel wells in the bed of the truck and filled with water. The smallest of the sets, a set of 2 tanks featuring a 6 foot length with a 20 inch width, will add approximately 550 pounds total (both tanks combined) to the rear bed of the pick-up truck, while the largest, an 8 foot length, 24 inch width will add approximately 833 pounds (both tanks combined) evenly across the rear axle of the pick-up truck. Because of the incredible strength featured by the Weight-Mates, the tanks are capable of being top loaded, which allows for continued use of the bed of the truck while using the weight-mates for increased pick-up truck traction.

Beach erosion is an international problem, plaguing coastal communities all across the globe. Many experts claim that rising water levels are a symptom or an effect of increased carbon emissions. The increased loss of sand over a number of years has decimated many beaches from the beauty and attraction that many of us once experienced. For many all across the globe, beaches are the most common tourist destination at any given point of the year. Beach destination vacations are a massive economic contributor, adding billions upon billions of dollars each year to global economies abroad. Increased sand loss at numerous beaches throughout the World have increased the demand for beach re-nourishment projects, such as the commonly used practice of dredging. Unfortunately, dredging has been deemed by a number of coastal experts to be an extremely temporary solution for beach re-nourishment as often, as fast as the sand can be pumped up to the beach and put into place with manual labor and heavy equipment, much of the sand is lost to the same natural wave energy and activity that consumes the sand back into the ocean surf. Granger Plastics has developed another rotomolded product, the Sandsaver as a natural solution to help combat beach erosion. The sandsaver works in 2 ways, firstly by breaking down the wave energy as the waves crash against the installed modules, secondly, the modules feature a large diameter opening on the surf side of the module, that allows water to come thru the tapered holes of the module, which allows the water to exit thru the smaller opening of the tapered tube, allowing the sand to fall and settle on the surf side of the beach erosion modules, thus allowing the water to retreat back to the surf, while the sand settles and eventually accumulates, burying the modules underneath the large sand accretion. The Sandsaver modules benefit from the durable rotational molding construction as they are capable of withstanding the repetitive forces of the wave energy and activity without deterioration. Granger’s Sandsaver product made headlines this summer as international demand grows for beach erosion solution. Granger Plastics is currently preparing for a Sandsaver installation at an international, 5 star resort in effort to re-nourish and stabilize their beach front property.

Tornadoes plague communities all across the United States during the Spring and Summer months. Tornado damage estimates typically average billions of dollars each year, as nature’s destructive forces rip apart homes, businesses, schools, hospitals and virtually anything else that is in the way of the tornado’s path. While we have elaborate warning systems, as well as extensive radio and television coverage of approaching storms, still hundreds of people are killed or injured each year from tornadoes, freak storms and other natural disasters. As with most all other forms of natural disasters, the best thing you can do for yourself and your family is to be prepared. Having a safe place to take shelter during an inclement storm or tornado is the first step to surviving a tornado emergency. Tornado Shelters have become more common over the last 20 years, as many families are being pro-active in providing a safe place for near absolute tornado protection. Ohio-based rotomoulding company, Granger Plastics manufactures a double-wall, foam-filled, rotationally molded tornado shelter, that gets buried underground to provide near absolute protection from a tornado or freak storm. Granger’s Underground Tornado Shelter, the Granger ISS (In-ground Safety Shelter) exceeds FEMA and ICC 500 standards for 7 adults. Because of the durable nature of the rotational molding process, the Granger ISS is the only tornado shelter in the world to provide a usable, 1,000+ year life span, outlasting all other shelters in the marketplace. The Granger ISS Tornado Shelter made headlines this Spring, as families across the US looked to add tornado shelters to their safety plans after March and Early April tornado outbreaks.