The oldest President in the history of Rotary International, Haven J Barlow, 92 will be sworn in on January 15, 2014. 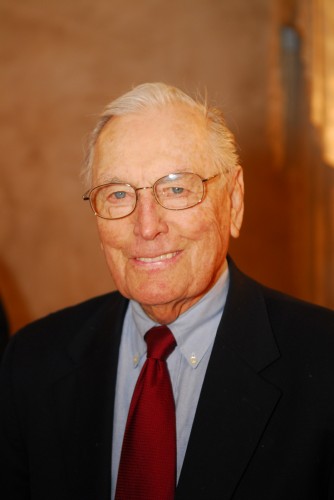 Layton,, United States - - January 14, 2014 /MarketersMEDIA/ — Haven J Barlow, a distinguished Rotarian charter member since 1958 will be sworn in as the new president of the Layton Rotary club on January 15, 2014. He turned 92 on January 4th and this makes him the oldest president in the history of this international club. He will be replacing former Layton Rotary Club President Lyle Elmore and will be sworn in by Bill McGuire, the Assistant District Governor for Rotary district 5420.

Mr. Barlow comments, "I love Rotary! I have been a member since 1958 and am honored to serve as the Layton Club president. We have the most wonderful members in our club and we plan to double our membership, our service and our fun this year in 2014!"

Lyle Elmore, current president said, "Haven is a stick of dynamite and will do an excellent job as our new president. He has a way of making things happen and we feel blessed to have him at the helm."

Haven Barlow opened the Barlow Realty and Insurance Company in 1949. This company remains a very successful real estate development and property management office in which Mr. Barlow checks in daily. He served in the Utah State Legislature from 1953 to 1994, longer than any other legislator in Utah History. He also served as President of the Utah State Senate for 6 years and has a number of notable achievements.
Among Haven J Barlow's accomplishments is founding the Hill Aerospace Museum in 1991 which is now home to 90 aircraft. The museum hosted its millionth visitor in 1996, and now has nearly 200,000 visitors annually. He has sponsored legislatures that has helped change and improve the Utah landscape for the better including the Utah Botanical Center, home of a “giving garden'' which donates all produce to local food banks. Becoming the president of the Layton Rotary Club will be one more significant contribution Mr. Barlow has made to his community.

About Rotary International:
This 1.2 million-member strong service organization began in Chicago, Illinois in February 1905 by Paul P. Harris, Attorney for professionals with diverse backgrounds to exchange ideas and network. The Layton Utah Rotary Club which is an active and vibrant club serving the community in many ways such as food drives, scholarships, service projects and collaborating with community leaders to improve Layton City, Utah.