The Rocky McElhaney Law Firm is pleased to announce a new campaign: “Best Matters.” This follows on the heels of firm founder Rocky McElhaney’s 2015 award of Best Attorney in Nashville by Nashville Scene’s reader’s poll for the Best of 2015. 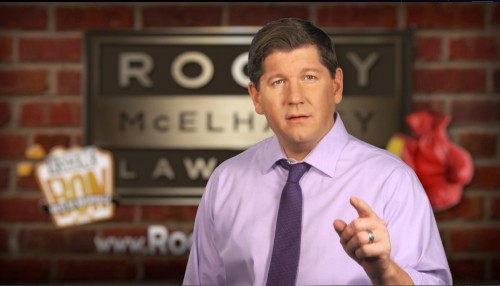 Nashville, TN, United States of America - January 18, 2016 /MarketersMedia/ — The Rocky McElhaney Law Firm is pleased to announce a new campaign: “Best Matters.” This follows on the heels of firm founder Rocky McElhaney’s 2015 award of Best Attorney in Nashville by Nashville Scene’s reader’s poll for the Best of 2015.

“The people spoke, and we heard them,” said Rocky McElhaney. “To be named ‘the best’ at something – anything – is already a huge honor. My team and I are extremely proud of receiving this title. It’s important to let people know that not all law firms are created equal. When you need a lawyer, you don’t want just any lawyer you need the best lawyer. It’s a humbling feeling knowing that Nashvillians and Middle Tennessee resoundingly agree that Rocky Law Firm is the best of the best!”

This bold new “Best Matters” campaign is marked by the release of our fifth national commercial. The campaign’s powerful new message will don approximately 18 billboards across Nashville, Columbia, Murfreesboro, Lebanon and Hendersonville. But Rocky didn't stop at billboards. The "Best Matters" campaign can also be seen on 65 bus benches sprinkled throughout Nashville. As a way to thank his clients and the community for their support and to get them in on the fun, Rocky has announced that he will be ringing in the launch of “Best Matters” with several giveaways exclusive to his firm’s email blast subscribers. To sign up for the firm’s email blasts, click here.

Scene Magazine has been conducting the “Best of Nashville Reader’s Poll” for the last 25 years. Rocky McElhaney was named to the list in 2014 for the first time, and awarded the coveted top spot in 2015.

Rocky McElhaney is the founder and principal shareholder of the Rocky McElhaney Law Firm. He has been practicing law for 17 years, with a strong focus on catastrophic injuries involving the brain and spinal cord. He has been involved in multiple landmark cases, the most recent of which involved Helen Bailey, whose home was wrongfully foreclosed upon by Chase Bank. In 2015, he was named to the Top 100 Trial Lawyers by the National Trial Lawyers Association; named to the Top 100 Lawyers in Tennessee by Super Lawyers; given the ESGR Patriot Award; and named to the Top Three Best Attorneys in Nashville by ThreeBestRated.com, all while maintain a perfect Avvo score of 10/10. He is a charter member of Trial Masters, and has served as the Vice President of the Tennessee Association for Justice.

The Rocky McElhaney Law Firm maintains offices in Nashville, Gallatin and Knoxville, Tennessee and fights for justice on behalf of the seriously injured. The firm’s attorneys primarily focus their practice in the areas of: