ENDS IN
Get Your Press Releases for up to 70% off ONLY in September! Save Now
Sign Up Your Account Send Press Release
MarketersMEDIA / Newsroom / Reel Ting Steel Drum Band Performs at Charity Tournament for Teams for Doctors Hospital 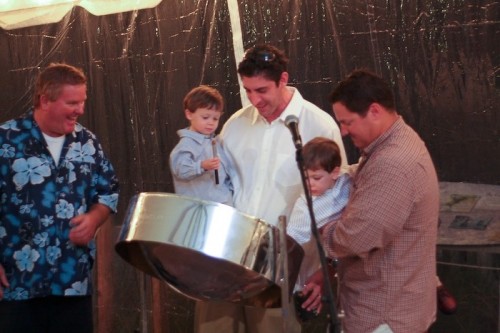 Islamorada, FL,, USA - - August 6, 2014 /MarketersMedia/ — The Reel Ting Steel Drum Band provided the entertainment for the 5th annual Doctors Hospital charity fishing tournament held at the Chesapeake Resort on June 21st 2014 in Islamorada, the Florida Keys. A great time was had by everyone as the Reel Ting Band performed its classic Caribbean hits such as ‘Yellow Bird’, ‘Day-Oh’, ‘Island in the Sun’, and ‘Mary –Ann’. The Doctors Hospital heard about the Reel Ting Band and George Pollis and its willingness to participate in children’s fundraising through the Baptist Hospital Foundation, as Pollis Chaired a similar event on Memorial Day Weekend 2014. The fund raiser name was Snake Creek Shootout held at Snake Creek Marina and Hog Heaven in Islamorada. The tournament raised several thousand dollars to benefit Baptist Hospital Children’s foundation, mainly for children fighting their battle against cancer.

About the Event:
The participants fished all day and when the reception event arrived “It was Party Time in Islamorada”. The festivities kicked off with an interactive Limbo dance. The party got into high gear when the kids participated in the Congo line dancing to the song, ‘Hot Hot Hot’. “It’s always great to see a smile on the face of a child”, said band manager and Steel Drum musician George Pollis. The kids love playing the Steel Drums. Palm Beach Pans, a Steel Drum manufacturer located in Jupiter Florida, developed and donated Steel Drums that the kids can learn and they sound great!! Last, but not least, a Caribbean Happy Birthday Song was sung by all using hand percussion musical instruments, Steel Drum by the Kids, and a sing along to close the tournament. What a Blast!

About the Charity:
Doctors Hospital , located in the heart of historic Coral Gables, is a 281-bed acute care facility that has provided high-quality medical care since 1949. Doctors Hospital is recognized for its services in orthopedics, neurosurgery, sports medicine, general surgery, minimally invasive laparoscopic surgery and women's health. Its nationally recognized Sports Medicine program serves the Miami Dolphins, Florida Panthers, and the Miami Heat, as well as Florida International University’s athletic program, Miami-Dade County Schools athletics, Discover Orange Bowl, Sony Open, World Golf Championships and Miami Marathon and Half Marathon. The neuroscience team at Doctors Hospital developed the first Gamma Knife program in the state of Florida. Since 1993, it has been a leader in neurological patient care serving patients from the United States and abroad.

Reel Ting Steel Drum Band is one of the most sought-after bands in Florida, performing weddings, receptions, corporate events as well as a plethora of nonprofit and business events.