MarketersMEDIA Year End Sale is back for 2020! Reach  APNews, MarketWatch, ABC,  and more than 480 media outlets at up to 80% off! Check It Out Now
Sign Up Your Account Send Press Release
MarketersMEDIA / Newsroom / Reasons the Largest Chinese Restaurant in the Netherlands Uses the Pudu Robotics Food Delivery Robot

Recently, the largest Chinese restaurant in the Netherlands uses the food delivery robot. 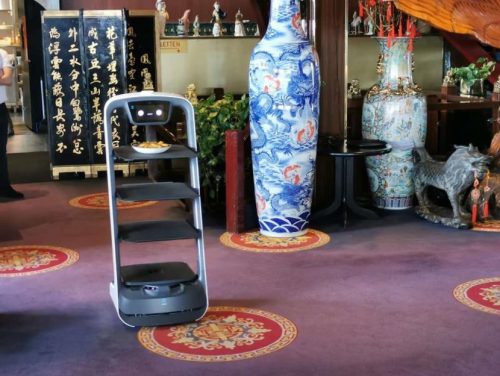 Amsterdam - As the sayings go, you are never in the Netherlands if you haven’t visited Amsterdam and when you are in Amsterdam, the Sea Palace is a must choice. The Sea Palace, just like the windmills, the wooden shoes and the tulips, was once taken as the synonym of the Netherlands.

In October 1984, this 4-storey giant and extravagant painted pleasure boat in the strong Chinese imperial style showed up in the picturesque Amsterdam River, shocking the Chinese society in Europe and the Netherlands. As a top Chinese palace restaurant in Europe, the Sea Palace has a business area of 3,000 square meters and can accommodate 800 guests at most. Offering over 500 dishes of Cantonese cuisine, it is known as the leading Chinese restaurant in the Netherlands.

Seated in downtown Amsterdam with a distinctive architectural style, the Sea Palace is promoted as a tourist destination by the local government. The Palace is frequented by the princes, the cabinet ministers and the socialites of the Netherlands. Major diplomatic events between the Netherlands and China, and the grand receptions of the Chinese embassy to the Netherlands are all held here.

The Sea Palace is therefore known as the starting point and witness of the overseas Chinese history in West Europe. It has been graced and recognized by the Chinese leadership, such as Hu Jintao and Zhu Rongji, during their visit to the Netherlands.

II. PuduBot as an efficient assistant to Sea Palace

However, hit by the COVID-19 pandemic in early 2020, the Sea Palace that had thrived for nearly four decades suffered from the hardest winter. As required by the government, the once busy restaurant came to a sudden halt for two and a half months from mid-March to early June.

As the pandemic gets under control, the Sea Place re-opened in June but faced grave challenges and rigorous policy requirements. According to the government policies, there should be a 1.5m distance among customers and no banquet with over 100 participants shall be held. The restaurant must be ran on a cautious basis, trying to increase revenues while controlling the costs.

In face of the pandemic, revenue increase is much harder than cost reduction. As the largest Chinese restaurant in the Netherlands, the Sea Palace needs over 70 employees every year. Labor cost accounts for a large share in its total expenditure. In the Netherlands, the monthly salary of a waiter or waitress can be as high as 1,500 euros. In addition, the local law stipulates that unless the employee quits, the employer shall not dismiss the staff and pay their salaries during the closedown.

Under the pressure of the intermittent pandemic outbreak and the high labor cost, the owner of the restaurant decided to do something to change the situation. He learned that to reduce people-to-people contact, many restaurants had widened the distance between tables, delivered the dishes with the trolleys that allowed the customers to pick up their dishes, or even built the glass booths.

Empowered by the independently developed technologies like the patent algorithm Pudu SLAM and the excellent hardware like the high-precision laser radar with a 120° S-PVA and the remote detection capacity, PuduBot demonstrated excellent performance in the trial run at the Sea Palace. With the superb detection ability. PuduBot is able to accurately detect the low obstacles nearby and the 3D obstacles in front of it, such as the passers-by, chairs, tables and hanging objects.

After one-week trial run, the Sea Palace decided to order several PuduBots, which will service the dining area on the second floor. The owner of the Sea Palace made the decision based on three considerations: the labor cost in the Netherlands is high; the investment on PuduBots can be recovered within one year; the owner is curious about the novel inventions.

PuduBot wins recognition not only from the restaurant owner, but from the customers, some of whom praised the PuduBot as the “perfect robot”!

As a landmark and tourist attraction in the capital city of the Netherlands, the Sea Palace is a milestone in the globalization journey of PuduBot. By now, the products launched by Pudu Robotics have made presence in over 2,000 restaurants of over 20 countries. This is the natural outcome as China’s competitive industries (represented by the service robots) go global and highlight the power of the Chinese technologies for the rest of the world.