Jason King is currently running from Miami, Florida all the way to San Fransisco, California - to raise awareness of Bitcoin, homelessness, and how people can help. 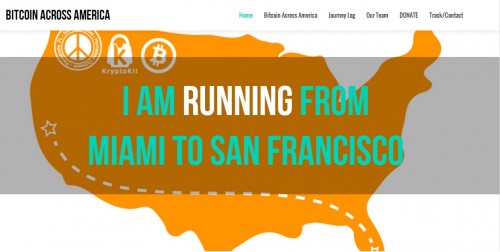 February 7, 2014 /MarketersMedia/ — Jason King, founder of homeless outreach center Sean’s Outpost, has launched Bitcoin Across America. He is running his own personal ultra-marathon from Miami, Florida all the way to San Fransisco, California to raise awareness of both homelessness and Bitcoin. He will be making a stop at the Texas Bitcoin conference on March 6 where he is a scheduled speaker. Money raised will provide meals and support for Satoshi’s Forest, the nine-acre homeless sanctuary owned and managed by Sean’s Outpost. Bitcoin wallet provider KryptoKit is providing the support RV and supplies.

Sean’s Outpost had been providing fifty meals a week to the local homeless community in Pensacola. Then on March 17, 2013, King began accepting Bitcoin donations with the following pitch: “Donate 1 BTC and we will feed 40 people.” At the time one Bitcoin was priced at $50 and it cost $1.25 to provide one meal.

The combination of the generosity of the Bitcoin community and how easy it is to donate anonymously using Bitcoin turned this decision into a watershed moment. Within twelve hours Sean’s Outpost raised enough to cover 80 meals. Eighteen hours later, enough Bitcoin to cover two months worth of mortgage payments flowed in. Sean’s Outpost purchased the land for Satoshi’s Forest and began building actual homes. King has dreams to produce food and supplies on Satoshi’s Forest using permaculture and other forms of sustainable agriculture and teach others how to do so.

King believes the issue of homelessness and hunger in America is not insurmountable, but rather a symptom of a monetary system that is rigged against the poor, whereas Bitcoin levels the playing field. “And while the game is rigged on the American banking system, Bitcoin changes that entire game. It tears down the walls built to deny access to the financial systems and gives control over personal economic freedom to anyone who wants to wield it,” King says on his website.

King announced the beginning of the Bitcoin Across America marathon at the close of the first North American Bitcoin Conference in Miami, which ran from January 24 to 26. With the increased adoption of Bitcoin allowing people to use it to make more and more ordinary purchases, the ability to use it to make near instant anonymous donations from anywhere in the world, and the game changing nature of Bitcoin itself, King may very well be on the verge of a major change for the better for the homeless population in America. Bitcoin has already helped provide food, land and homes. With King’s run across America, more people than ever will learn about Bitcoin, homelessness, and how they can help.

To learn more about Sean’s Outpost please go to: http://seansoutpost.com/