Profit Confidential explains that three major factors points to further losses for the stock market in 2016. 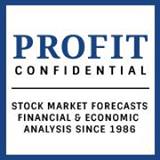 “U.S. equities are being punished, with the S&P 500 down 7% since the beginning of the year and down more than 10% from its 52-week high,” says economist and lead contributor Michael Lombardi. “And three key factors suggest U.S. stocks are going to feel even more pressure in 2016.”

Lombardi explains that contracting revenue and earnings, the number of institutional investors leaving the stock market, and weak technicals could lead to a stock market crash in 2016.

As of February 19, 87% of the companies in the S&P 500 have reported fourth-quarter results. The blended earnings decline is -3.6%; the blended revenue decline is -3.7%. The fourth quarter of 2015 will mark the third consecutive quarter in which earnings have declined for the S&P 500 companies and the fourth consecutive quarter in which revenue has declined. The last time this happened was when the stock market crashed during the Credit Crisis of 2008 and 2009. (Source: “Key Metrics,” FactSet data set, February 19, 2016; http://www.factset.com/websitefiles/PDFs/earningsinsight/earningsinsight_2.19.16.)

“Another indicator pointing to a stock market crash is the so-called smart money indicator. The National Association of Active Investment Managers exposure index shows the percentage of stocks active money managers currently hold in their portfolios,” Lombardi adds. “In early February 2015, almost 100% of portfolios of institutional investors were invested in stocks. One year later that number stood at just 22%. Institutional investors have become increasingly pessimistic about the stock market and seriously reduced their exposure to stocks.”

“The stock market spent much of 2015 putting in a huge top—a resistance level for stock prices that could last for years,” Lombardi adds. “In 2016, the stock market could crash as corporate earnings continue to contract, institutional investors continue to be pessimistic about stocks, and technicals fall apart.”