Plasma Etch Inc. has created a Magna Series of plasma etching systems that eliminate the need for harmful gases in the PCB manufacturing industry. 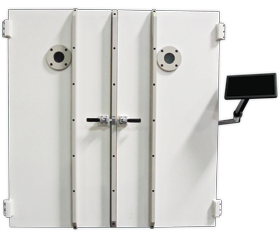 The company offers patented plasma cleaning systems for a range of uses within industry. In 1987 the company invented a true plasma process temperature control technique to allow a consistent temperature to be maintained throughout the entire plasma sequence and be controlled completely independently of the plasma process. This pattern of innovation has continued through to the present day, when they present the world’s first truly green plasma etching system.

Just some of the key features and advantages of this amazing technology from Plasma Etch Inc. include faster etch rates than conventional systems and better etch uniformity due to a rotating carousel fixture.

The device also has a large capacity. 8 x 19" x 28" panels can be processed per load cycle, with both sides processed simultaneously.

Oxygen is introduced from an on-board gas generator with no processed gas cylinders required, and uses a dry vacuum pumping system that is maintenance-free, requiring no oil.

The new device promises considerable yearly operating cost savings and above all is environmentally friendly thanks to its completely green process.

A spokesperson for Plasma Etch Inc. explained, “Truly green plasma cleaning is now a reality, and the innovations that have led to this point have created such a wide variety of other advantages that it is absolutely competitive and in businesses’ best interests to invest in these superior technologies. The elimination of CF4 gas is a huge leap forward, and these patented technologies are only available through Plasma Etch Inc., the leading innovator in plasma technology since 1987.”