MyMasterWar is a gaming ecosystem with the difference that blockchain technology is applied to the game along with the Free Play to Earn and Profit Sharing model. 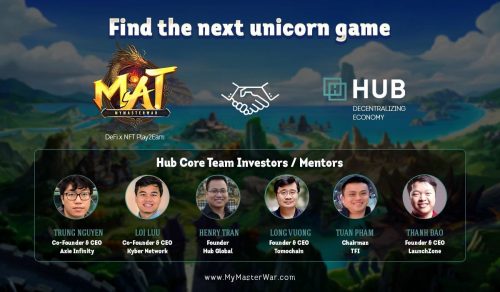 Hanoi, Vietnam - September 14, 2021 /MarketersMEDIA/ — MyMasterWar is a well-known game around the world, particularly in Vietnam and Asian nations. In the game, there are two kinds of tokens: fungible tokens and non-fungible tokens (NFT).

MyMasterWar NFT game is quite similar to traditional games. The distinction is that blockchain technology, in addition to the "play to earn" and profit-sharing is used in the game. Players may enjoy the game while also earning a profit from it.

Players in the MyMasterWar Game may create their own scenarios; each participant is like a king of a nation, and they can pick generals, construct armies, design strategies, and conduct battles. The key to winning wars, conquering strongholds, and uniting the world is in the selection of generals, general equipment, and combat tactics.

The second part of the game will take place in a future where humans across space and time build their own virtual Metaverse empire. Players will use virtual reality glasses to play games instead of mobile devices or laptops. Here, gamers can immerse themselves in the 3D virtual world, turning into gods with endless power with the ability to create and conquer new worlds.

The MyMasterWar team recognizes that these elements are critical to the player's experience and ability to succeed in the game, therefore they have placed these generals and game goods on the blockchain (tokenization), allowing players to truly experience the game and control these indefinitely and openly.

Players may profit by winning battles, seizing strongholds, selling NFT generals on the market, or just encouraging others to join the game. Players may begin playing right away without having to purchase anything. Purchasing NFT generals or game goods enhance the players' chances of making more money.

The majority of MAT tokens are used in the game environment. The team is experienced developers in the field of information technology, game publishing, blockchain. The team is very famous in Vietnam.

The team is planning to raise capital and launch the game in September. Find out more information at the official website: https://mymasterwar.com/