ENDS IN
Get Your Press Releases for up to 70% off ONLY in September! Save Now
Sign Up Your Account Send Press Release
MarketersMEDIA / Newsroom / Newest Educational Learning Toy Set Can Help Save Rainforests: Click-A-Brick

The team at educational learning toy company Click-A-Brick say their Rainforest Rascals set can help teach children about the rainforest and cultivate interest in rainforest conservation. With rainforests disappearing at an alarming rate, any interest among the next generation is good, the company says. 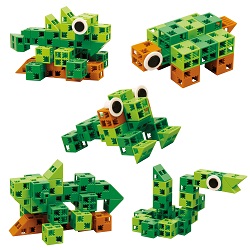 Las Vegas, United States - August 4, 2015 /MarketersMedia/ — The team behind educational learning toy Click-A-Brick says its new 30-piece Rainforest Rascals set can be used to teach children about the rainforest and build interest about rainforest conservation. They hope that by getting children interested in rainforest conservation the next generation of adults will make a concerted effort to save this important ecosystem.

According to the Rainforest Conservation Fund, rainforests are disappearing at the rate of hundreds of thousands of kilometers per year. If not stopped, it is estimated that they could completely disappear by the mid-21st century.

While it may seem like a stretch to say that a toy could have an impact on rainforest conservation, Click-A-Brick Co-Founders Jason Smith and Georg de Gorostiza say, every little bit helps and if the toy can interest just a few children in such a serious subject, they are glad they can help in this indirect way. However, it will also take parents’ help to stimulate such an interest.

“Toys can be highly influential for children because they’re playing with them at such an impressionable age,” Smith said. “They won’t just be building these reptiles and amphibians without thinking about them. Children are curious about the world so they’re probably wondering about these animals, where they come from, what they are, where they live. If parents are there to stimulate this type of learning with their kids, it could very well influence them enough to become really interested in helping to save the rainforest as an adult. The more people interested in rainforest conservation, the better. We’re not saying Click-A-Brick will save the rainforests, but who knows, maybe some Click-A-Brick fans who grew up playing with the Rainforest Rascals set will make a significant impact on them.”

With a reptile and amphibian theme and featuring bricks of light green, dark green and brown, the newly released Rainforest Rascals set is capable of building an iguana, a snake, a frog, a turtle and a chameleon, plus any other reptiles or amphibians children can imagine. It was released simultaneously with the 30-piece Dino Pals set and the 30-piece Mini Machines sets.

For added interest, parents can couple the Rainforest Rascals set with the earlier-released 30-piece Feather Friends set, which features red, yellow and blue bricks, plus eyes and is capable of building a number of tropical birds like a macaw, a flamingo, a toucan, a cockatiel and a kingfisher.

Both the Rainforest Rascals and Feather Friends educational learning toy sets, along with the Dino Pals and Mini Machines sets, are available through Amazon and the Click-A-Brick website.