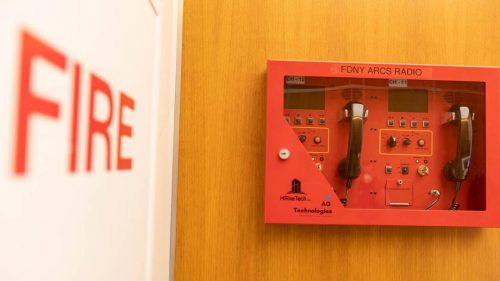 Bronx NY, United States - September 12, 2021 /MarketersMedia/ — It has been 20 years since the tragedy of 9/11; it is important to reflect on the events from that horrific day, and what has been learned to help improve communication among first responders and the FDNY firefighters. According to numerous studies including the 9/11 Commission Report, many lives could have been saved that day had there been better communication technology to communicate effectively with the Fire Command Center inside the Twin Towers.

Since that tragic day, the New York City Building Code has been updated to require the installation, testing, maintenance and certification of an Auxiliary Radio Communication System (ARCS) for all high-rise buildings to provide a reliable communication method for first responders to use during an emergency. Title 28, chapter 7 contains the New York Construction Code, which has been updated to mandate the use of ARC systems.

The Basics of an ARC System

An Auxiliary Radio Communication System is a two-way emergency radio network designed for first responders, especially firefighters, to use during a crisis. ARCS uses exclusive FDNY radio frequencies to prevent interference which allows firefighters to communicate seamlessly within the building, even when separated by thick walls of concrete or steel.

According to the City of New York, high-rise buildings erected after December 31, 2014, require the installation of an ARCS. A commercial building with a floor that is 75 feet higher than the lowest possible level of entry for the FDNY’s vehicles or a residential building taller than 100 feet is considered a high rise building.

An FDNY approved ARCS supplier based in Bronx NY - AG Technologies - was recently interviewed to gather some insights as to the importance of the ARCS technology. The firm’s CEO, Adam Goodrich, stresses the importance of why ARCS are a necessary part of a building’s infrastructure: “When the FDNY is called to a building that is on fire, such as a high rise office or apartment building, it’s important that they are able to communicate with one another as they move throughout the building trying to put out the fire and save lives. It allows the FDNY to freely move around the building, coordinating with others via the ARCS to ensure maximum communication”

When asked how AG Technologies is able to help implement an ARC system in an NYC high rise, Adam Goodrich states: “Understanding ARCS regulations can be confusing, but AG Technologies is here to guide you through the process. We start with engineering and filing of a fully designed ARCS system with the New York City Fire Department. During the filing period, updates are provided to the building managers and owners, including resolving any objections from the FDNY. Once the FDNY has granted approval of the ARC system, then the installation process is started.”

After installation of an ARC system is complete, inspection, testing and commissioning of the system is conducted alongside the FDNY. “This process can be lengthy and complex, and the team at AG Technologies works with the customer every step of the way to ensure that the building receives the final Letter of approval.” adds Mr. Goodrich.

Based in Bronx, NY, the company is committed to assisting its customers with all of their commercial and residential ARCS needs from engineering, installation, maintenance and FDNY violation removal. They have built a reputation on the sound principle of providing professional service and high-quality products to all their customers. They are currently licensed and conduct business throughout the 5 boroughs of New York City, Westchester County, Nassau County, Suffolk County, Lower Hudson Valley, and Northern New Jersey. For more information about the company and their latest campaign, visit their website at www.agtechnologiesllc.com.