Frank immigrated to the US at the age of 21 without a dime in his pocket and speaking barely any English. After having achieved a lot, he still believes a lot more needs to be done. 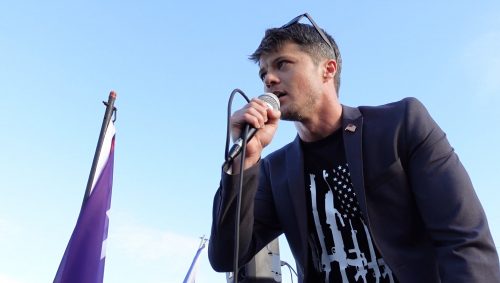 March 14, 2021 — Frank “Fire” Valentine, who arrived in the US a decade ago as a political refugee, has quickly climbed up the ladder of success in just a few years. Frank has not only launched several successful business ventures but also turned many of his dreams into reality. Like becoming an American citizen, venturing into politics, and more.

To save American culture and the 2nd Amendment, Frank has launched Firearms of America and is a registered firearms dealer. Even without a brick-and-mortar location, he sells more guns than his local gun store. Frank is also not shying away from showing off his success on social media with his boat parties and the company of beautiful women.

Frank’s YouTube channel, Firearms of America, has been a resounding success with his fans and followers. The channel also reveals his political leanings. His first political speech at Trump’s rally in downtown Fort Myers, FL, has set the tone for his future activities. Among his ventures is a coaching business, built over several years of hard work. The main aim of these courses is to build confidence and overcome one’s fears and anxieties. To date, over 10,000 copies of his courses have been sold since their launch in 2018.

Frank immigrated to the US at the age of 21 without a dime in his pocket and speaking barely any English. After having achieved a lot, he still believes a lot more needs to be done. His ultimate goal is to be the biggest name in the gun industry, whether it is sales, services, or manufacturing.

Frank has also started working with Brendon Leslie’s UnBossed Reporting. He has a series with a new episode every Monday. Additionally, he is working with a team of architects and GCs on his brick-and-mortar facility, which for now, is top-secret.