Happy 2020! We have updated our Terms of Services on Cashback Credits. Read More
Sign Up Your Account Send Press Release
MarketersMEDIA / Newsroom / New Adult Card Game – Fast-Growing Board Game Market, Promising A Dose of Comic Relief in a Stressful World

One of the latest additions to the card game segment is In Which God We Trust – which is labeled as a conversation starter game for gatherings of families and friends. The game is about connecting on a different level with other adults. 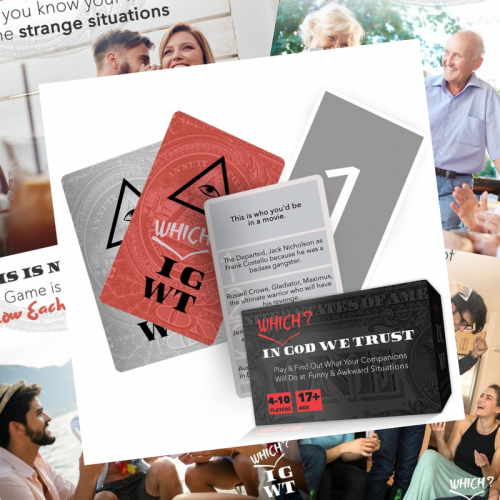 Toronto, ON, Canada - October 3, 2019 /MarketersMedia/ — Toronto, ON – CA - - - The global board games market is expected to reach $12 billion by 2023, with adult board and card games a fast-growing part of that number. One of the latest additions to the card game segment is In Which God We Trust – which is labeled as a conversation starter game for gatherings of families and friends 17 and older. And while the name of the game would suggest a religious focus, the card game’s developers say that is not the case and instead, the game is about connecting on a different level with other adults while having lots of laughs.

“Everyone has unique perceptions that make us behave a certain way in various situations. This game builds on that fact and results in a lot of laughter and fun, a better understanding of what motivates each other, and can even bring people closer,” explained Tom Goldenstein, Game Designer, IwGWT - “It’s perfect for adult gatherings, bachelorette parties and even as a drinking game.”

The game is from Game Design by IwGWT, published by Out&Joy and is intended for groups of four to eight. It comes with 150 cards that each contains a scenario and four options to choose from as to how the player would react in that circumstance. Some of the scenarios are far-fetched and some more common. The player whose turn it is, chooses their response and the rest of the players vote as to how they think that player would react in a given situation. Points are scored for correct guesses and detracted for incorrect guesses. The winner is the first player to reach 20 points. Goldstein asserted that the cards do not contain any inappropriate scenarios.

“In Which God We Trust can get loud and raucous and has been known to reduce grown men to fits of giggles,” Goldstein added. “Every now and then some secrets come out! But it’s all in good fun. Laughter is a known stress reducer, and in today’s world, who doesn’t need a little comic relief? We think this game offers that.”

During beta tests, the game was most popular with women ages 21 to 40 but was well-received in general, according to Goldstein. In Which God We Trust is priced at $27 and comes with a 30-day return policy and money back guarantee. For more information or to order, go to Amazon.
Iwgwt@Amazon.com