With the help of supporters, fans and a talented creative team, Broadway actress Syndee Winters (Motown The Musical, Disney's The Lion King) will perform as the legendary Lena Horne accompanied by a 10-piece orchestra on March 24. 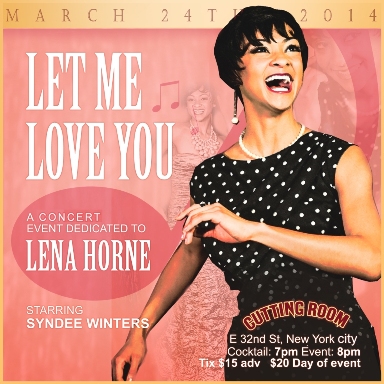 New York - - March 5, 2014 /MarketersMedia/ — This passion project aptly named "LET ME LOVE YOU" is listed on the crowdfunding platform Indiegogo.com to raise awareness and production costs for a debut concert event dedicated to celebrate the life and early career of singer, activist, and first Black movie star of the Golden Age, Lena Horne.

"I am delighted to bring Lena back for a special night, returning a touch of class, elegance, and vivacious spirit to entertainment." says Winters "Lena Horne was beauty and elegance personified. She also embodies the facets of a true Lady".

A devoted Lena Horne fan herself, Winters will perform many of Horne's renowned standards while sharing stories of the star's life and career, including her early days at the world-famous Cotton Club and memories of Hollywood.

These days many creative artists are using crowdfunding which goes way beyond fundraising because project supporters are able to redeem valuable 'perks' for themselves while ensuring that events like this unique New York Concert become a legacy success.

For details about the March 24 performance at The Cutting Room (44 E 32nd Street) and to claim the tickets and other valuable reward perks, visit Syndee's Indiegogo.com project