Napoleon Hill's Think and Grow Rich was a powerful book that has transformed the lives of millions of people. Author, Monica Main, has discovered two chapters deliberately left out of the original book and she's making it available for the world 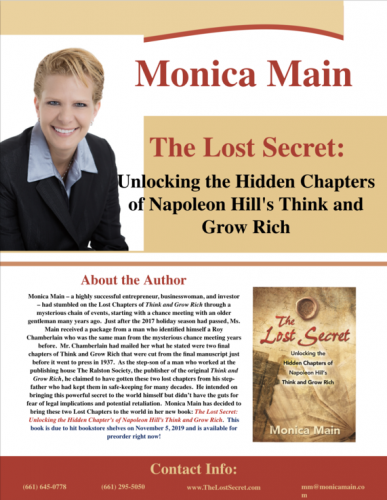 October 31, 2019 — Valencia, CA: In 1937 self-help author, Napoleon Hill, published a book titled Think and Grow Rich. The personal development and self-improvement book went on to become one of the top 10 bestselling self-help books of all time, selling over 100 million copies.

Despite being a huge success, people didn't know that two whole chapters were left out of the original edition. These chapters were removed because publishers thought they were too powerful for the public to consume.

Now, 82 years later, author and entrepreneur, Monica Main, has found the two missing chapters of the Think and Grow Rich and she's ready to let everyone have access to it.

Her book titled, The Lost Secret: Unlocking the Hidden Chapters of Napoleon Hill's Think and Grow Rich, offers insights into the lost chapters of the famous book and unlocking the best-kept secrets of the rich and powerful.

The book is due to hit bookstore shelves on November 5, 2019, and is available for preorder on Amazon right now!

Anyone who has read the original Think and Grow Rich would know how powerful it is. The book is a complete work of genius, written by a master thinker, and inspired by a suggestion from business magnate and philanthropist Andrew Carnegie.

It talks about 13 principles that everyone needs to follow for them to become successful in whatever they do. The book has been the favorite of business tycoons, professionals, experts, businessmen and women, scientists, and anyone who desires success.

Following those 13 principles has helped many to achieve greatness beyond their wildest imagination. What people didn't know was that they're not even getting the best of the ideas and principles from the book. Two chapters were left out deliberately. The powers that be wanted to keep those so they can use the ideas inside it to keep wealth to themselves and control the rest of the world.

Nature has ways of correcting itself and saving its own. A couple of years back Monica Main met someone who claimed to be a stepson of a man who worked at the publishing house; The Ralston Society, who happens to be the publisher of the original Think and Grow Rich. He claimed to have access to the two lost chapters from his stepfather who had secured them in safekeeping for many decades.

Years later, the man sends Monica Main a mail containing the chapters. He intended on bringing this powerful secret to the world. These two chapters will show readers how to gain instant access to everything they want in life. It is packed full of powerful information that will open the mind of the readers and show them the way to unlimited success.
For more information, please contact 661-645-0778 (cell), 661-295-5050 (office), or visit www.monicamain.com.