Media Freeware has launched a YouTube Video Downloader that will make videos from the world’s largest video library available to users offline simply by downloading their favorites. 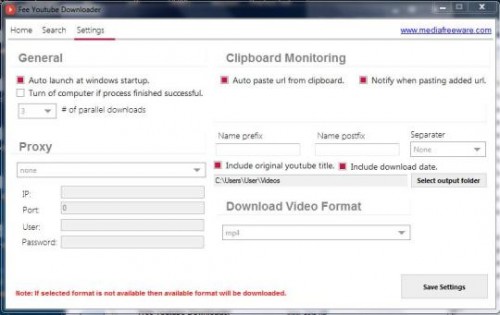 New York, NY,, United States of America - - January 8, 2014 /MarketersMedia/ — YouTube is the world’s most popular video site, and is the most popular brand in the world with people aged 18-24 according to the Youth 100. The site has become so popular because it has effectively crowd sourced multimedia production and allowed everything from cats doing funny things to cosplaying concert violinists to become smash hit sensations. The only disadvantage to YouTube is that there is still no way to play videos from the site when offline. Media Freeware has now answered that question with a free to download YouTube Downloader to download, convert and playback videos from the site offline.

The software allows users to download YouTube videos and convert them into playable formats. The software comes with an unlimited usage license and can be used to download as many videos as users can stuff in their hard drives, and also allows for multiple and simultaneous downloads. Users can enter URLs of videos one by one or import bulk URLs from an external source for even quicker listings.

The software is free to download from the Media Freeware homepage and is also syndicated on major resource repositories like CNET and SoftPedia. It can be downloaded and installed in moments and enjoyed for a lifetime, compatible with all versions of Windows.

A spokesperson for Media Freeware, “The downloader not only downloads the video but will convert them into formats that can be played on popular devices, including MP4, 3GP and Webm so that mobiles, tablets and PCs can play back the FLV source files without the need to install additional software. It is a one-stop resource in downloading videos from YouTube for playback offline, which increases the accessibility of YouTube immeasurably and gives users what they have asked for but Google has been unable to deliver- offline video playback.”

About Media Freeware:
Media Freeware have been developing specialist software solutions for everyday problems for years, and create intuitive and easy to use free downloads. The company has a particular passion for enabling individuals to engage with media in new ways. They regularly publish new suites of software that are often found on CNET and SoftPedia with high ratings from reviews and users alike. Their latest product is a YouTube video downloader.