Media Freeware have created a YouTube to MP3 Converter so that individuals can download their favorite music tracks free of charge from the popular video sharing site. 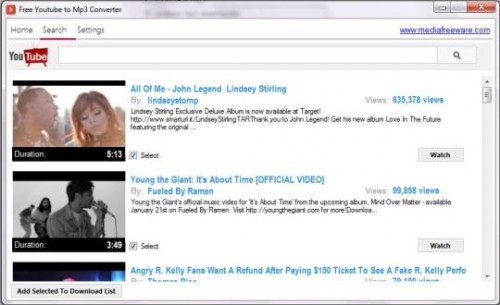 New York, NY,, United States of America - - January 16, 2014 /MarketersMedia/ — YouTube is the single hottest brand for young adults 18 to 24 years old according to the Brand 100, and it’s easy to see why. YouTube provides both a platform for people to publish their own content and a means by which to see content from billion dollar media titans, including the music industry. It is thought that more people use YouTube to listen to music than ever before, but this creates problems for users when they want to listen to their favorite tracks offline or on other devices. Media Freeware has solved this problem by creating the YouTube to MP3 Converter.

The software is free to download and install and takes just moments to have up and running. From there, the unlimited free license allows users to download and convert as many YouTube videos as they want by simply entering the URL, or a list of URLs, into the software and hitting ‘convert’.

The YouTube to MP3 software is available now from the Media Freeware homepage and is also being syndicated by major resource centers including CNET. The software is lightweight in size and uses very little processor power despite its fast conversion speed, and is compatible with every version of Windows.

A spokesperson for Media Freeware explained, “Most young people nowadays create playlists for the favorite tracks on YouTube rather than alternative, music-specific sites like SoundCloud. This is because YouTube gives them all the functionality of any other site while also giving them video playback. However, these users do find themselves limited when using portable devices offline, and that’s why we’ve created the YouTube to MP3 converter, which allows users to simply translate videos to sound files and listen to the audio on MP3 players and other devices.”

About Media Freeware:
Media Freeware are one of the most prominent creates of freeware in the business, and regularly release new software designed to provide novel solutions to common everyday problems. The company uses a team of experienced software developers and regularly syndicates its wares on major resource centers like CNET and SoftPedia, receiving strong reviews from users and critics alike. Their latest release is a YouTube to MP3 converter.