The global MCB and MCCB market is projected to touch a size of USD 11,513.9 million by 2023. It can experience 7.28% CAGR from 2018 to 2023 (forecast period) due to protective measures required in electrical grids for preventing short circuits. 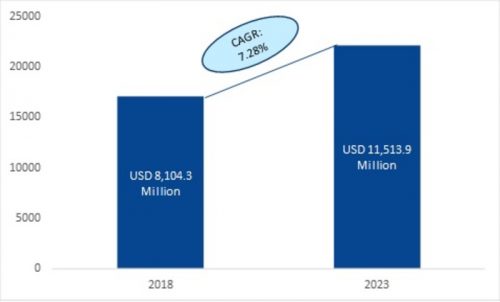 The global MCB and MCCB market report by Market Research Future covers an analysis of the latest trends, factors, and drivers affecting the market.

Get Free Sample Copy of “MCB and MCCB Market Research Report – Global Forecast till 2023” at: https://www.marketresearchfuture.com/sample_request/7260

Investments in Asia Pacific moves for electrification in rural regions, and transition towards decentralized distribution and transmission of power are factors which can drive market growth.

In addition, influx of wherewithal in the renewable energy sector, development of new power generation projects, replacement of legacy infrastructure, and constant demand of electricity are other factors which can command the demand of MCBs and MCCBs. Moreover, demand for such electrical devices in renewable energy plants in China, India, and Southeast Asian countries can augur well for the global MCB and MCCB market.

But weakness towards slow tripping and heat can restrain market growth.

The MCB and MCCB market is segmented by type, rated current, and end-use.

By type, it is segmented into MCB and MCCB. The latter is expected to be the best-performing segment due to its capacity to prevent circuit shortage of equipment with power rating of 1000A. They have self-adjustable settings for protecting electrical equipment against faults, short circuits, and thermal overloads.

By rated current, it is segmented into up to 20A, 21-75A, 76-250A, 251-800A, and above 800A. The 76-250A segment is expected to dominate in the market due to its application in transmission & distribution, automotive, manufacturing aid process, and residential and commercial buildings.

The APAC region accounted for 34.06% share in 2017, with the valuation of China pegged at USD 820.6 million in the same year. The growth can be attributed to heavy investments in the renewable energy sector coupled with construction of transmission & distribution plants. Formulation of policies and subsidy schemes to achieve renewable energy targets can bode well for the market. This is exemplified by the construction of solar power projects of China and India capable of generating close to 130 GW and 175 GW respectively.

Europe is expected to be the second-largest region due to renewable energy targets agreed by various countries part of the European Union (EU). Supportive policies for retrofitting or replacement of legacy electric infrastructure are expected to drive the regional market growth substantially.

Get Complete MCB and MCCB Market Report at: https://www.marketresearchfuture.com/reports/mcb-and-mccb-market-7260

MRFR team have supreme objective to provide the optimum quality market research and intelligence services to our clients. Our market research studies by Components, Application, Logistics and market players for global, regional, and country level market segments, enable our clients to see more, know more, and do more, which help to answer all their most important questions.