Oakland criminal defense attorney and certified criminal law specialist, Robert J. Beles successfully won a commuted sentence for his client Alex Barajas, who had been serving a sentence of 80 years to life. 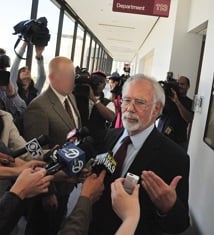 Oakland, CA, United States - September 20, 2019 /MarketersMedia/ — The Law Office of Beles & Beles is pleased to announce that their client, Alex Barajas, has received a commutation of his sentence by Governor Newsom.

Commutation is a form of clemency that reduces the punishment for a crime. Only the President may commute federal sentences and in California, only the governor can commute a state sentence.

Commuted sentences are very rarely awarded. Although the California Department of Corrections and Rehabilitation reports that California has a current prison population of 125,583, only 21 commutation requests were granted by Governor Newsom this month.

Due to the commutation, Mr. Barajas is now eligible for a parole suitability hearing after one more year in prison.

When commuted sentences are granted, they are usually rewards for good behavior or remedies to reduce an unreasonably harsh sentence. In the case of Mr. Barajas, both reasons are true.

Mr. Barajas’ family originally hired The Law Office of Beles & Beles in 2009, so the office has been working on the case for almost a decade. The firm’s criminal defense attorneys handled both the federal appeal in the Northern District of CA as well as the appeal in the Ninth Circuit Court.

"We never give up on our clients, no matter how long it takes. When I learned of Alex’s case back in 2009, I knew in my heart that his sentence was unreasonable. The punishment did not fit the crime and our office worked hard to get his sentence commuted."

Mr. Barajas, now 35, was originally convicted in 2007. He received an unusually lengthy sentence for attempted murder of 80 years to life. The sentence essentially meant that Mr. Barajas, a young father of 21, would spend his entire life in custody.

Mr. Barajas is deeply remorseful for his actions and, according to the authorities, has behaved impeccably while in custody as a model inmate.

He has resided in the Delancy Street Honors Unit for the past three years. According to the manager of the Delancey Street Honors Unit, Mr. Ramiro Mejia, “Mr. Barajas has worked hard at changing his own self-destructive behaviors. He has participated in Conflict Management, Anger Management, Alternatives to Hostility and Violence, Empathic Understanding of Victims and Stopping Addictive Behaviors. Today, he teaches these same subjects to other inmates so they can stop their destructive ways.”

The Law Office of Beles & Beles is grateful that Governor Newsom recognized that Mr. Barajas is a changed man who deserves a second chance to become a productive member of society.

The criminal defense attorneys at The Law Offices of Beles & Beles welcome contact from anyone who is facing state or federal criminal charges anywhere in Alameda or Contra Costa County. The firm handles appeals for both state and federal criminal cases throughout the State of California.

Certified Criminal Law Specialist and Founder Robert J. Beles began his own criminal defense law firm in 1979 after a decade of experience as an Alameda County Public Defender. Since 1975, he has been a criminal law specialist certified by the State Bar of California Board of Legal Specialization.