Nevada has seen record rates of unemployment in 2020. Laborer's Union Local 169 supports Nevada's community by donating $12,500 to local charities to help put food on the tables of those in need. 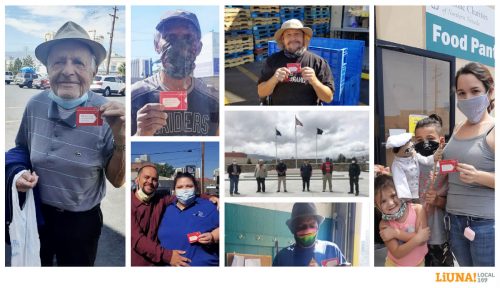 Eloy Jara, President of Laborers Union Local 169, stated, “We at Local 169 know many families are struggling to put food on the table right now, and we want to help the local community meet this basic need. That’s why we decided to help with this donation totaling $12,500. We hope this provides food to those needing it most at this critical time.”

With Nevada’s unemployment rate peaking at a record high of 30.1% this year according to U.S. Bureau of Labor Statistics, many charities are reporting greater demand for services.

“These seven nonprofits are pillars in our northern Nevada community," Jara said. "We’re happy to ensure we get this financial assistance in the hands of those that need it most. Together we can make a difference. United we stand.”

Reno Initiative for Shelter and Equality (RISE) received 100 Raley's gift cards of $25. RISE serves some of the most vulnerable in the Reno/Sparks area at Our Place, a women and family shelter. It houses 114 women, 25 families, and 18 seniors who would otherwise be homeless.

“Many of the families we will be welcoming in have either been living at the Reno Events Center (due to the COVID-19 pandemic), or have been living either in their cars or outside," Benjamin Castro, Executive Director of RISE, said. "This will be their first time experiencing some privacy and access to their own fridge for months. Having the ability to fill it with their own food is a comfort that so many of us take for granted. We hope it will give them a sense of normalcy and belonging.”

Castro said, “on behalf of the RISE Team and the unsheltered families we serve, we sincerely thank our brothers and sisters from Local 169 for their support. Their contribution means they understand the value of community and that there is no future without us all.”

Jocelyn Lantrip, Food Bank of Northern Nevada spokesperson, accepted the $2,500 donation of Raley’s gift cards on behalf of the charity. The need for emergency food within northern Nevada has drastically increased from the 18.2 million meals the Food Bank distributed during the 2018-2019 fiscal year.

Lantrip explained, “Before the COVID-19 crisis, we were serving 91,000 people every month, and half of them are children and seniors. The numbers have risen significantly."

"This donation is so important to families in our area," she said. "Many have suddenly lost their income and they are struggling to pay any of their bills, including food for their table.”

The Food Bank serves people who live within the organization’s 90,000 square mile service area, including northern Nevada and some counties on the eastern slope of the Sierra Nevada in California.

Lantrip said, "We are so grateful for partners like (Local 169), because we simply could not do this work alone. This help will change lives.”

CCNN Chief Development Officer Jennifer Hill said “through our Resource Hub and Food Pantry, these gift cards will help our clients extend their grocery budget. Most of our clients receive food stamp benefits, which are designed to cover the cost of groceries for three weeks. The food boxes they pick up from us are intended to cover the fourth week of the month."

"With grocery prices on the rise, now is a wonderful time to be able to give our clients this extra benefit to help stretch their food budget and keep food on the table for their family,” Hill said.

Local 169 presented $5,000 in donations to four veterans' organizations: the State Commanders of the American Legion, Disabled American Veterans, Veterans of Foreign Wars (VFW) and Vietnam Veterans of America. Each of the four veteran organizations received $1,250 worth of grocery store gift cards.

“When passing out the gift cards to veterans at the Silver Spring food bank, several were in tears,” Jackson said. "That $25 gift card goes a long way and means a lot to our vets.”

Jackson stated, “Vietnam Veterans of America is greatly appreciative of Local 169’s generosity and through that generosity, we were able to help a number of veterans, in particular seniors and those that lost their jobs."

Tony Yarbrough, VFW Commander of the Department of Nevada, said the this donation came when funds were greatly needed.

“Our fundraising efforts during the pandemic have been cut off, while the needs of those in our communities have dramatically increased," Yarbrough said. "Our local food banks, and other available services are strained as they serve as many as possible. The kind and unexpected donation from Local 169 could not have come at a better time. Your warmhearted giving is both timely and appreciated.

Department Commander Jim Stewart of The American Legion Department of Nevada said this donation went to needy veterans who need food to feed their families.

“The impact will be huge to our needy veterans, young and old," he said. "Many people do not realize that we have a lot of young veterans with families that are in need, not just our elderly veterans."

Frank Greenwood of Disabled American Veterans (DAV) Department of Nevada, said, “DAV provides outreach to veterans to ensure they have the support they need, and with this donation our chapter was able to help several veterans and homeless veterans.”

Local 169 represents more than 1,200 workers in northern Nevada, primarily in construction, and is a member of LIUNA — the Laborers’ International Union of North America — a powerhouse of 12 million workers producing 5 percent of the USA’s economic output.