Happy 2020! We have updated our Terms of Services on Cashback Credits. Read More
Sign Up Your Account Send Press Release
MarketersMEDIA / Newsroom / Kinsman Swim Will Bare Nearly All at L.A. LIVE

Kinsman Swim Will Bare Nearly All at L.A. LIVE 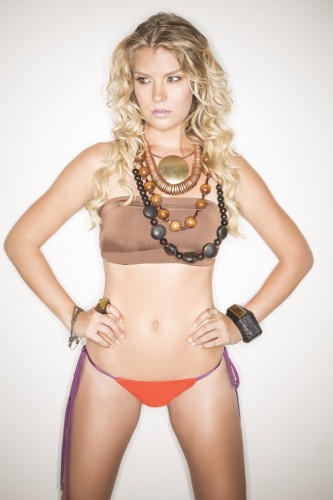 Los Angeles, CA,, USA - - March 6, 2014 /MarketersMedia/ — Style Fashion Week is back this March with a stunning line up of designers taking over the runways like never before.

Now in their 7th season, the mega-fashion event welcomes designer Joanna Kinsman of Kinsman Swim to showcase her latest Signature Collection, as well as 2014 designs, on Tuesday, March 11th at 5PM.

Kinsman Swim is comprised of lingerie-inspired looks that resemble top-shelf lingerie, and are hand-sewn in Southern California. The designer got her start while living on the East Coast, but quickly resorted to Los Angeles, where she developed a cohesive, sultry line of Brazilian cut bikinis.

Yet LA wasn’t ready for the scantily cut designs, and at the first debut in Hollywood, some models weren’t able to walk for the brand, as tan lines were an issue on the runway. Since then, it seems that the industry has taken a liking to the extravagantly risqué collection, and Joanna is thrilled to take part in her first LA Fashion Week runway premier.

“It’s such a distinct privilege to be invited to show at such a high profile event, and what an honor to see all of my hard work and networking over the years hugely paying off. This is truly a pivotal opportunity for me as a designer,” stated Kinsman, having recently relocated from Marina del Rey to San Diego.

The luxury swimwear company remains based in Los Angeles, and is growing quite a reputation for stunning, jaw-dropping silhouettes. The Kinsman Swim name is synonymous with designs that push the envelope, but as one of Kinsman’s models, Arlene Sara put it, “LA needs more butt cheeks.” Simple as that.

Style Fashion Week LA is the largest, most influential fashion event of the season. This time around, events will be held March 9th-13th on the renowned L.A. LIVE Event Deck. The 5-day, high-energy event will feature two full runways showcasing national and international artists, and the most talented emerging designers from all over the world that will be styled by Official Hair Sponsor FHI Heat and Makeup Sponsor STARLOOKS PRO Cosmetics.

An expansive brand marketplace will immerse guests in art, fashion, and design and allow them to directly engage with brands and designers throughout the week. Boulevard Nightlife Group, Style Fashion Week's Bar and Nightlife Partner will be crafting specialty cocktails for guests to enjoy during the event.

Kinsman Swim’s show on March 11th will take place at 5PM, and doors open at 4PM. The schedule for the week is as follows:

Official Hair Sponsor FHI Heat will work hand in hand with the designers to create unique and innovative hair concepts that complement the designer's Fall 2014 Collections. Makeup Sponsor STARLOOKS PRO will craft the hottest runway makeup looks for this season's designers, using the newest, most luxurious and innovative PRO products from their Cosmetic Line.

Kinsman Swim is pleased to thank its own contributors in addition to the Style Fashion Week cast and crew, partners, volunteers, Impressionist Designs Inc, and jewelry lines LovMely, A. Marie Jewelry, and Alexa Mitchell Designs.

Kinsman Swim can be found at the prestigious Fred Segal in Santa Monica, as well as Amazon and in it’s online store.