5 PROS and 5 CONS of the Tablet Revealed by the New Amazon Kindle Fire HDX 8.9” Review in Comparison to the iPad Air, iPad Mini with Retina Display and Google Nexus by TabletXray.com 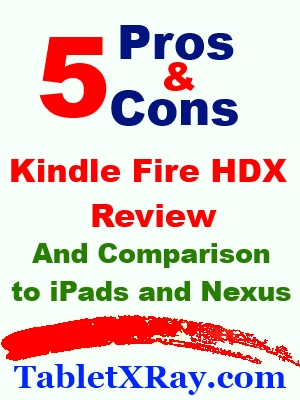 Chicago, IL,, USA - - April 29, 2014 /MarketersMedia/ — There is no doubt that the newest multimedia tablet from Amazon, the Kindle Fire HDX, is winning the tablet wars on many hardware and software aspects. However, it still has a few deficiencies compared to other popular tablets like the Google Nexus, Apple iPad Air and iPad Mini with Retina display.

This New 5-point Kindle Fire HDX Review which compares the Kindle range of tablets to the Apple iPads and Google Nexus tablets helps consumers identify the PROS and CONS of the Amazon Kindle Fire HDX based on their individual needs. The comparison is unique because it takes into account all 3 major aspects of a tablet, namely: (i) hardware specs, (ii) operating systems, and (iii) the content eco-systems, in its review. In contrast, many others are biased towards hardware, and fail to factor in content networks and operating systems that bring the hardware to life. This is why the review by Tablet XRay is a much recommended read for anyone considering purchasing a Kindle Fire, iPad or an Android tablet.

www.TabletXray.com/iPad-Air-vs-Kindle-Fire-HDX-8-9-vs-Google-Nexus-10-Comparison is dedicated to comparing the larger models of the tablets, the 8.9” Amazon Kindle Fire HDX, the 9.7” 5th generation Apple iPad Air, and the 10” Google Nexus 10. This Kindle Fire HDX 8.9” review focuses on 10 specs, again related to hardware, content networks and the operating systems. The main hardware specs reviewed are the displays/screens, processor (CPU), RAM and graphics (GPU), storage options, battery life, front and rear camera specs, and ports and connections. The 3 operating systems, iOS 7, Fire OS 3.0, and stock Android, respectively, of the iPad, Kindle Fire HDX and Google Nexus are also briefly compared. Last but not least, the content eco-systems are compared under 4 sub-topics: (i) music, (ii) video, (iii) apps, and (iv) eBooks. Especially for the final comparison, they refer to results from previous surveys and studies from sources like the Huffington post and App Annie.

Among the 5 features compared on the 5-point review, the price differences among the tablets takes an important place. The price differences between the Apple iPads and the Kindle Fire HDX tablets can be as much as $320 for tablets with similar configurations (e.g. same storage capacity and Wi-Fi and/or 4G LTE connectivity). This is a major plus towards the Fire HDX because those savings could be spent towards a second tablet, Fire TV set-top-box, or accessories like Kindle Fire HDX cases, screen protectors, Bluetooth keyboards etc. The (i) display quality, (ii) processor/RAM/GPU power, (iii) content eco-systems (Amazon vs Apple iTunes vs Google Play Store) and (iv) the operating system (Android vs iOS) are the other four specs reviewed and compared in detail on http://TabletXray.com/Kindle-Fire-HDX-5-Point-Review/

The TOP 5 Shortcomings of the Kindle Fire HDX compared to the iPad and Nexus are also important features to be aware of. For most people, the lack of a rear camera on the 7” Kindle Fire HDX, the lack of an HDMI port, the inability to customize “Fire OS 3.0” etc. are of minor significance, nevertheless, it is important for any potential buyer to be aware of these potential limitations. In addition to the reviews on Kindle Fire HDX 8.9 and 7 inch models, they also publish current deals on all kinds of Android, iOS and Windows-based tablet computers.