MarketersMEDIA Year End Sale is back for 2020! Reach  APNews, MarketWatch, ABC,  and more than 480 media outlets at up to 80% off! Check It Out Now
Sign Up Your Account Send Press Release
MarketersMEDIA / Newsroom / Jam Anytime, Anyplace with Thingamagig—The Voice Activated Electric Guitar Karaoke System

Live on Kickstarter, Thingamagig is an Alexa-enabled effects processor for electric guitar. 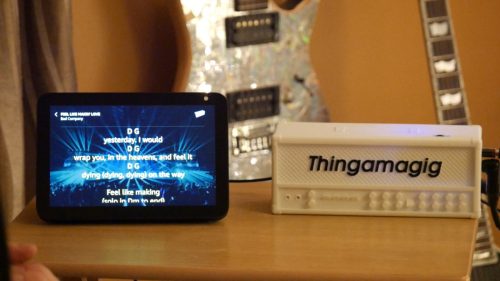 With millions stuck at home across the globe, jamming in-person with friends is currently on hold. Thingamagig is hoping to create some at-home solo-jamming magic with its new all-in-one Alexa-enabled effects processor and karaoke-style machine.

“Finding a guitar tone is typically an expensive, manual process. You've got to have certain equipment and then you've got to spend time tweaking knobs and switches or paging through presets with your hands and/or feet. There is a metric ton of friction. Finding and playing along to a backing track is similarly manual,” says founder and CEO Cyrus Adkisson on the inspiration behind the project. “Thingamagig solves both of these problems at the same time. First, it's just one piece of equipment and it has no knobs, buttons or pedals. Instead, you ask Alexa for a song title and - boom - there's your tone. Then, ‘Alexa, begin playback’ and you're instantly rocking out to a perfectly-mixed, tone automating, looper-controlling backing track.”

During playback, lyrics and chords scroll while the guitar's tone changes and loopers activate automatically, creating a surprisingly fun jamming experience that wasn't previously possible. It's like having a band, roadie and sound engineer in one device. Here's the secret: Thingamagig itself is the source of these fully-licensed tracks, not a separate streaming service. This means that the device understands the underlying composition including tempo, key, and structure and can, therefore, precisely automate tones, effects and loopers along with it, enabling an immersive experience like nothing else on the market.

“Plenty of guitarists want to experiment with pedals and knobs and switches. We get that. That's not going away,” adds Adkisson. “But others of us just want to play. We want to sound like our favorite songs and jam away and we don't want to spend a lot of time or money getting there. Thingamagig is the most cost-effective, streamlined way to do that.”

Thingamagig is currently live and available to support on Kickstarter: www.kickstarter.com/projects/cyrusadkisson/thingamagig-alexa-enabled-effects-processor-for-guitar

Thingamagig is a trail-blazing innovator in the amp modeling and "jam along" spaces of the electric guitar market. The company leverages digital wizardry and Internet connectivity to tastefully reduce friction and cost in the service of what every guitarist wants: making the experience more fun. For more information on Thingamagig please visit thingamagig.com