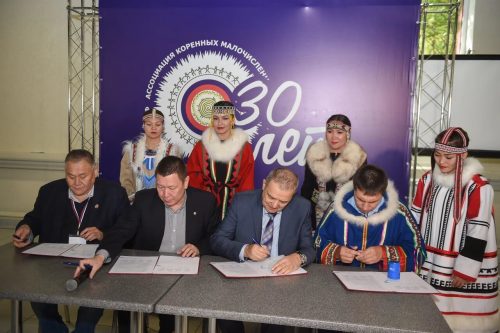 Dozens of members of the Nenets, Nganasans, Dolgans, and Enets communities will receive financial support for schools, kindergartens and other necessary needs.
Organizations representing indigenous peoples who signed an agreement with Norilsk Nickel unite more than 90% of the indigenous population of the northern regions of Russia.

Indigenous peoples and Norilsk Nickel have developed a joint action plan worth 2 billion Russian rubles ($ 25.9 million). The support plan includes support for traditional activities, protection of the habitat, as well as financing of housing, medical, infrastructure, tourist, social and cultural projects.
The company considers this step to be important.

“Supporting indigenous peoples is one of the most important priorities of our company, Norilsk Nickel's strategy is based precisely on these values. The goals that we set for ourselves are a significant improvement in the quality of life of the indigenous peoples of Taimyr. We are fully committed to protecting the rights of indigenous peoples, which is why the new agreement provides mechanisms for open dialogue, development of cooperation and systemic support. Nornickel traditionally closely interacts with organizations representing the interests of indigenous peoples, ensuring transparency in decision-making and maximum efficiency in the implementation of joint projects, " said Andrey Grachev, Vice President of Norilsk Nickel.

The new program was the result of an ethnological expedition that took place this summer in Taimyr. The expedition members conducted over 100 interviews and surveys of representatives of indigenous peoples. Based on their proposals, priority tasks were identified, including the creation of seasonal jobs in areas such as tourism, reindeer husbandry, fishing and hunting. In particular, it is already planned to build workshops for the processing of reindeer and fish, purchase refrigeration units, build an ethnic complex with workshops for the production of fur products, subsidize helicopter transportation, targeted training in specialties in demand in the company, the publication of textbooks in native languages and many other complex solutions.