The Blockchain Connect conference, which took place on January 26, 2018 in San Francisco, was the first high-level dialogue between China and US elites from the blockchain industry. 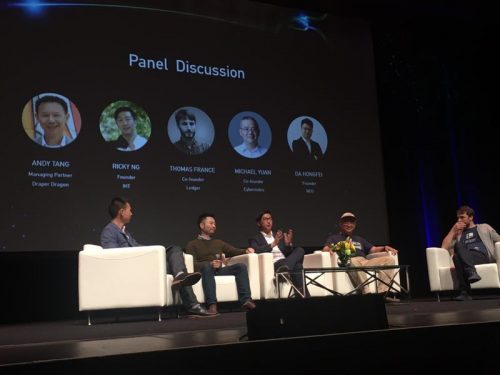 Hong Kong, China - February 6, 2018 /PressReleaseAgency/ — At this eye-catching event, i-house token (IHT), the first global real estate blockchain cloud platform, carried out its first global roadshow. Ricky Ng, Founder of IHT, attended the conference and had an engaging discussion onstage with Andy Tang, Managing Partner at Draper Dragon, Da HongFei, Founder of NEO, Michael Yuan, Co-Founder of Cybermiles and Thomas France, Co-Founder of Ledger. The panelists shared their insights and views on the adoption of blockchain technology in China and the US with over 1,000 entrepreneurs, investors, developers and media from all over the world.

At the end of 2017, IHT successfully launched its tokens on the global arena. Since then, it has gathered strong interest and been considered by industry leaders and the media one of the 15 most notable projects in 2018. With the team’s extensive experience at reputable internet and real estate companies such as Yahoo, Baidu and Wanda, and the influence of its consultants, the project has attracted a total investment as high as USD 30 million from overseas blockchain investors, which displays IHT’s unparalleled competitiveness among its peers in Asia.

Real estate is a vital component of various assets around the world. In 2016, the total value of global real estate hit nearly USD 217 trillion, about 2.7 times higher than the world’s GDP. It makes up 60% of mainstream global assets, and amounts to 36 times the global gold value, USD 6 trillion.

Globally, it remains as a topic under heated discussion to determine effective ways of digitalizing properties, securitizing assets, and making these tradable on the market. In light of this, the IHT team came up with the idea of applying blockchain technology to the global property transaction market. It also aims to include property transactions as part of a digitalized credit society, through combining blockchain technology with property, and connecting real estate developers, financial institutions and their investor clients. The mission of IHT is to improve the efficiency of property transactions with advanced financial technology in a bid to streamline the property transaction process. Meanwhile, it aims to optimize the allocation of property assets and its circulation, contributing to overall economic growth. It is also committed to sharing benefits among property owners and investors, as well as all dividends brought by the technology.

Currently, the blockchain platform includes property programs from Australia, China and Japan among others. It is now forging new collaboration with developers from Thailand, Malaysia, Cambodia and so on, and besides, it also aims to cover more areas around the world such as the United States and Europe in the coming two years.

As briefed by Ricky Ng, Founder of IHT, the team has attracted top level business leaders and expert consultants, including Yale Reisoldeil, Founder of McAfee Crowdchain Technology Inc, Ms. Tzu Wen Maryann Tseng, Managing Director at CLSA Limited, Zhou Jiayuan, Operation Director of the Internet Finance Department under Fosun International, and Ivy Hou, Senior Manager in Deloitte’s Financial Engineering and Modeling practice. We believe that with the involvement of more talented individuals, IHT is well-positioned to tap into the immeasurable potential that blockchain can bring to the real estate industry and secure enormous growth in the near future.

At the Blockchain Connect conference, the IHT project has gained widespread recognition from participants of the event. Ricky Ng, Founder of IHT, says he will never forget why he started the business, and will work together with blockchain pioneers to promote the industry’s growth, and allow more customers to benefit from blockchain technology and the IHT platform.