The hydrogen and fuel cells market is gaining considerable impetus globally, while thankful for the recent infrastructural advancements in the field of hydrogen production. Hydrogen and Fuel Cells Industry by Type (Air-Cooled and Water-Cooled Type), By Application (Stationary, Transport, Portable) - Forecast to 2025 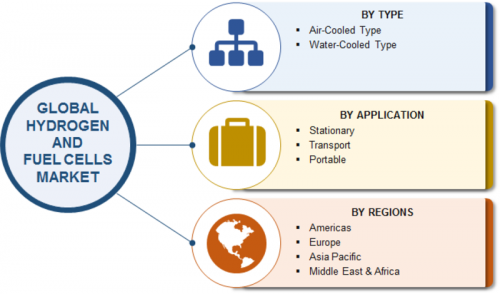 The hydrogen and fuel cells market is anticipated to garner a CAGR of 25.09% during the forecast period (2011-2025), Market Research Future (MRFR) unveils in a detailed report. Hydrogen and fuel cell uses hydrogen as a chemical component, which is propagated into the fuel cell so that energy is generated. Fuel cell can be referred to as an electrochemical device, which combines oxygen and hydrogen to generate heat, water, and electricity.

The hydrogen and fuel cells market is gaining considerable impetus globally, while thankful for the recent infrastructural advancements in the field of hydrogen production. The upsurge in the adoption of electric and hybrid vehicles has also boosted the demand for hydrogen fuel cells, globally, reflecting a positive approach to the growth of the overall market.

The hydrogen and fuel cells market is mainly propelled by factors such as increasing demand in the telecommunications, automotive and residential micro-CHP sector, and diminishing dependency on non-renewable energy sources. However, shorter resilience of the fuel cell is expected to hinder the market growth over the forecast period. It is evident that the advanced countries across the globe are highly focused on making hydrogen as a dependable and effective energy generating source. The abundant benefits of fuel cells over major segments to produce pollution-free energy will generate a huge influence shortly. Top automakers such as Toyota, Hyundai, Honda and Daimler have recently showcased their hydrogen fuel powered vehicles in the market relating to their zero-emission quality.

The hydrogen and fuel cells market is segmented based on type and application.

By type, the global hydrogen and fuel cell market is segmented into water-cooled type and air-cooled type. Of these, air-cooled type commands for the largest share, surpassing a valuation of USD 1,300 million in 2016. The segment will expand at the highest CAGR in the coming years. This type uses two primary methods, like active and passive methods. Both of these methods offer efficient and cost-effective cooling, which promote their growth.

By application, the hydrogen and fuel cell market are segmented into transport, stationary, and portable. Among these, the stationary application acquired the largest share of 81.14% in 2016. The segment surpassed a valuation of USD 1,300 million and is likely to retain its growth due to the increased application of stationary fuel cells at different end user industries.

Of these, North America had the largest market share in 2016 with a valuation of 753.1 million. The fuel cell deployments in this region have encouraged many R&D activities, supporting market growth. Moreover, federal tax incentives for FCVs, hydrogen infrastructure, and fuel cell stationary power generation, and investment by state governments have also propelled the use of fuel cell and hydrogen technologies in certain parts of the country.

The Asia Pacific is another largest hydrogen and fuel cells market holder owning a share of 28.47% in 2016 with a market value of USD 461.7 million by witnessing the growing population along with rising disposable income here in driving the demand for energy. Also, hydrogen and fuel cell is identified as the best replacement for conventional fossil fuel energy. This factor is taking the Asia-Pacific region to higher consumption of fuel cell and supporting the market tremendously.

Europe had a market share of 22.61% in 2016, with a valuation of USD 366.7 million. The European Strategic Energy Technology (SET) Plan identifies fuel cell and hydrogen technologies as crucial technologies contributing to reaching the ambitious goals of European energy and climate policy with a time horizon of 2020 and beyond.

June 2019: The Trade and Industry of Japan, Ministry of Economy, The United States Department of Energy, and the European Commission Directorate General of Energy together issued a joint statement stating their intention to strengthen trilateral cooperation on hydrogen and fuel cell technologies.

July 2018: Bloom partnered with Key Equipment Finance to help finance setting up for more than $100 million in fuel cell projects and with SK Engineering and Construction expanding its sales channel in South Korea. Battery storage was included in 27 of Home Depot's fuel cell projects with Bloom in 2018. Bloom continues to blaze trails in powering data centers and other critical applications for a wide swath of Fortune 500 firms.

MRFR team have supreme objective to provide the optimum quality market research and intelligence services to our clients. Our market research studies by Components, Application, Logistics and market players for global, regional, and country level market segments, enable our clients to see more, know more, and do more, which help to answer all their most important questions.